Swimming Between Kale and Asparagus 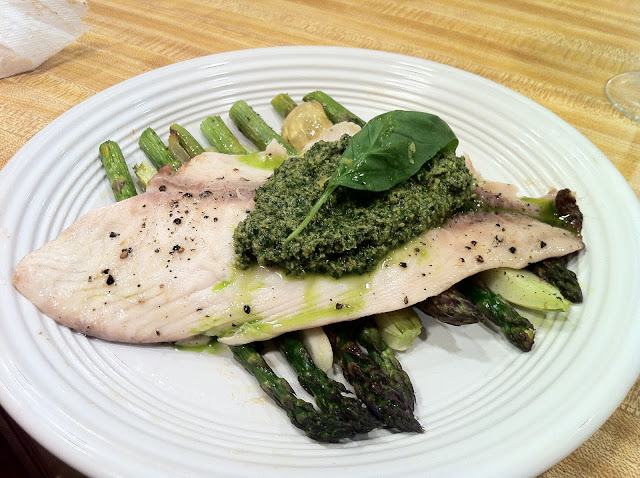 I was in the mood for a very healthy and flavorful dinner. I had read a blog post about pasta with walnut and kale pesto, and I wanted to make my own version of the pesto but with a light fish instead of heavy pasta. I decided on tilapia, because it's a little heartier than cod, but still has a much lighter taste than salmon or trout. Along with the fish and pesto, I wanted some roasted spring vegetables, so I grabbed a bunch of asparagus and a bulb of fennel.


I made the pesto first so I could let it sit while I prepped the rest of the meal. I always try to make sauces first so they have plenty of time for the flavor to expand. For this pesto, I used a head of kale, basil, garlic, walnuts, lemon, parmesan, and olive oil. I chopped the garlic and cut the kale from the stems. I toasted the walnuts in a pan (about 5 minutes) and then a added some olive oil, the garlic and kale, and a squeeze of lemon and sauteed until the kale began to wilt. I added all of this to a blender along with the basil, some more lemon, salt, pepper, and olive oil. I blended until smooth and added some grated parmesan and made sure the nutiness and citrus were balanced and the pesto tasted right. 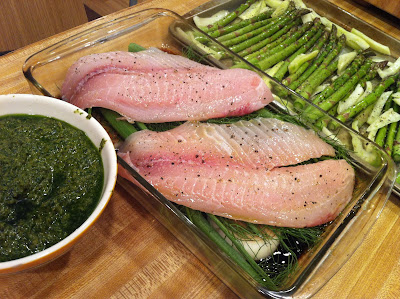 Once the pesto was done, I preheated the oven to 375 and prepared the fish. I wanted to bake the fish, so I cut up an onion in slices, put them in a baking dish with some balsamic vinegar and the fronds from fennel bulb. I coated the fish with salt, pepper, and olive oil and laid it on top of the fennel fronds, onion and balsamic. Once the fish was ready, I prepped the asparagus and fennel, cutting off the rough ends of the asparagus and cutting the fennel into thin strips. I tossed the veggies in olive oil, salt and pepper and put them on a baking dish. I put both the fish and the veggies in the oven and baked for 25 minutes. 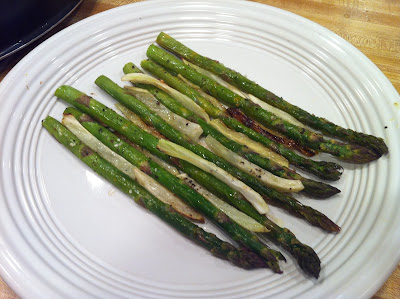 Once the fish was cooked through (I checked the fish by seeing if it flaked with a fork) and the veggies were starting to brown, I took them out of the oven. For the presentation, I lined the asparagus and fennel in alternating lines on the plate. I then laid the fish on top and spooned the pesto on top.

The dish was really tasty. The pesto had the familiar garlic and basil taste, but the walnuts and kale gave it a very earthy and unique flavor, complimenting the light taste of the fish perfectly. The asparagus worked really well with the fennel, their flavors balancing well, and a bite with both veggies and the fish was a well balanced burst of flavor. Best of all, the dish was extremely healthy! 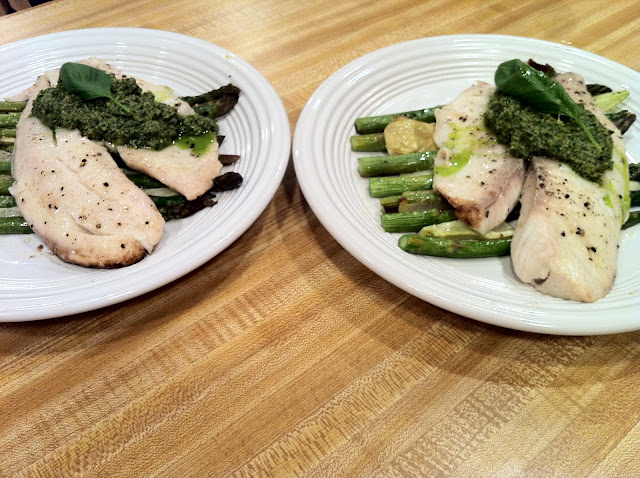