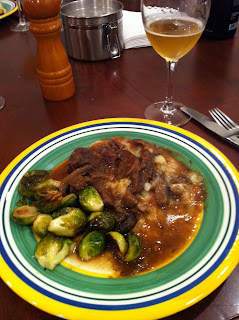 My good friend Dave was turning 26 and a celebration was in order. Instead of dropping a lot of money at a restaurant, we decided that a home-cooked meal would be best. Dave is one of my favorite people to cook with and a very good chef himself, so I wanted to be sure to deliver a meal to remember. He has requested beef stew with mashed potatoes and brussel sprouts, and I obliged. The plan was to meet around 5 in Williamsburg for some drinks and oysters and then head to my place for dinner.

I picked up the ingredients from Whole Foods and rushed to get the stew on so that it would have enough time to cook before we met up for drinks. I wanted to do a classic beef stew, so I got about 4 lbs of stew beef, carrots, cipolini onion, mushrooms, red wine and beef broth. For the potatoes, I wanted to do a horseradish and chive mash, to give a nice tangy flavor as a counter to the warm and hearty stew. I picked up 4 lbs of yukon golds, some chives, greek yogurt, and horseradish. For the vegetable, I grabbed 4 lbs of brussel sprouts.

With my very heavy bag of groceries in tow, I headed home to get cooking. I cut up the carrots into thin discs, sliced the mushrooms, peeled the cipolinis and cut up some garlic. Once my vegetable prep was done, I salt and peppered the meat and browned it in batches so that I didn't overcrowd the pot. Once the meat was browned, I poured off the fat and sauteed the vegetables until they were starting to brown. I added the meat back in, tied up a bunch of thyme and bay leaf, and covered everything with about half a bottle of malbec and 4 cups of beef broth. I brought the pot to a low boil, covered it and put it in the oven at 375 for about 2 hours (taking off the cover for the last 45 minutes to let it thicken.)

For the potatoes, I peeled the yukons and put them in a large pot of boiling water. I boiled them for about 15 minutes until tender, drained them (saving a little of the water) and mashed them up. I added in about a cup of greek yogurt, 2 tablespoons of horseradish, 1 tablespoon of butter, salt and pepper. I then used a hand blender to make the mash very smooth, and once it was smooth and rich, I added in about half a cup of chopped chives.

For the brussel sprouts, I cut the rough base stem and then sliced them in half. I tossed them in olive oil, salt and pepper and cooked them for 35 minutes at 375 until they were brown on top.

The meal turned out great. We shared a nice bottle of Belgian style beer and laughed the night away while we enjoyed the meal. One thing I did realize is that beef stew is very difficult to photograph in an appetizing way. Despite the aesthetics, the dish was beautifully balanced and exactly what Dave wanted for his birthday dinner!
Posted by Ty's Kitchen at 12:55 PM