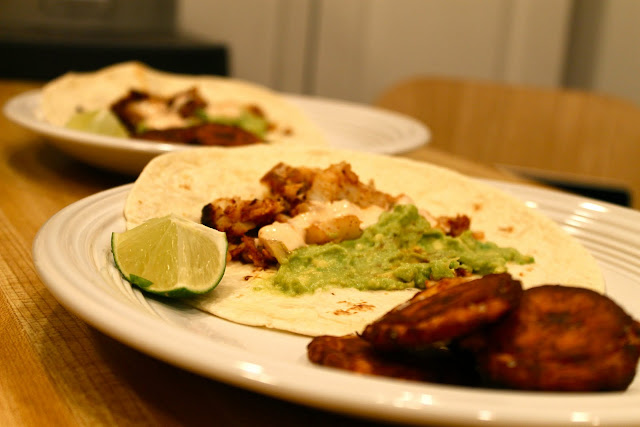 A warm summer night called for a light and refreshing meal, so I came up with blackened hake tacos with lime-avocado spread and a sweet chili sour cream. I picked hake because it's a nice flaky white fish like cod that goes well with all different types of seasoning. To go along with this, I made a cucumber salad and fried plantains. 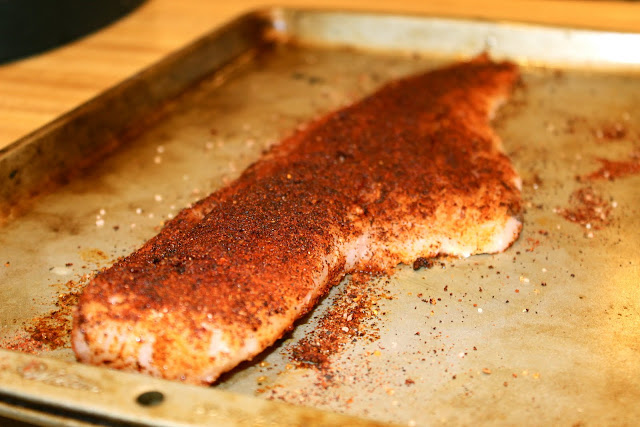 First, I coated the fish with seasoning so that it would absorb the flavor. I mixed chili powder, cayenne, paprika, ground cumin, salt, and pepper and coated the fish generously. 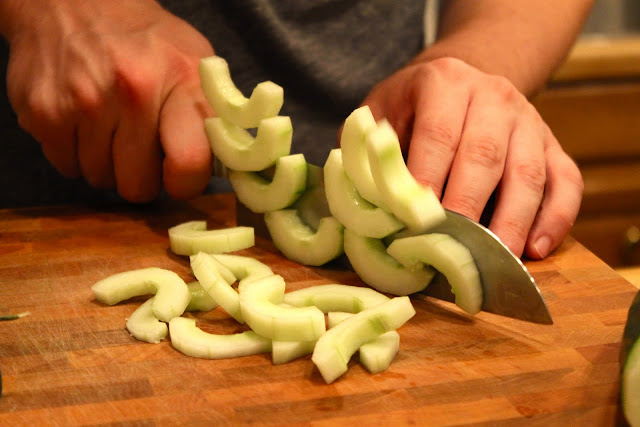 I then peeled, seeded, and cut up the cucumber for the salad. For the dressing, I mixed red wine vinegar and honey in a bowl, and tossed the sliced cuke. I put this aside in the fridge to let the cuke absorb the sweet and tangy flavors of the dressing so that it was almost a quick pickle-type salad. 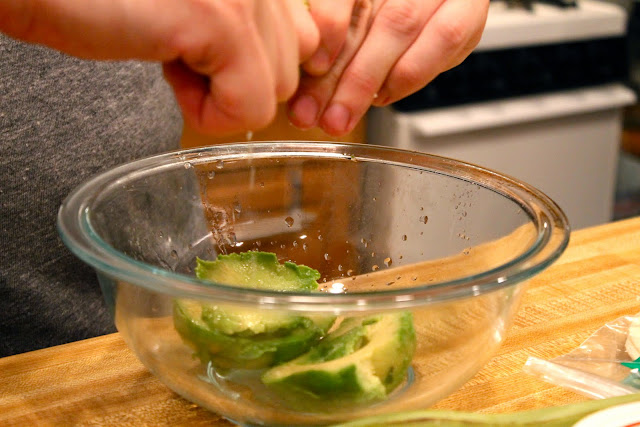 I then worked on the condiments for the tacos. I spooned an avocado into a bowl, sprinkled it with salt and lime, and mashed it up with a potato masher. I wanted it to be a little chunky, so I used the masher instead of a food processor to keep the avocado texture the way I wanted it. Once this was mashed, I placed plastic wrap directly on top of it to avoid oxidization. 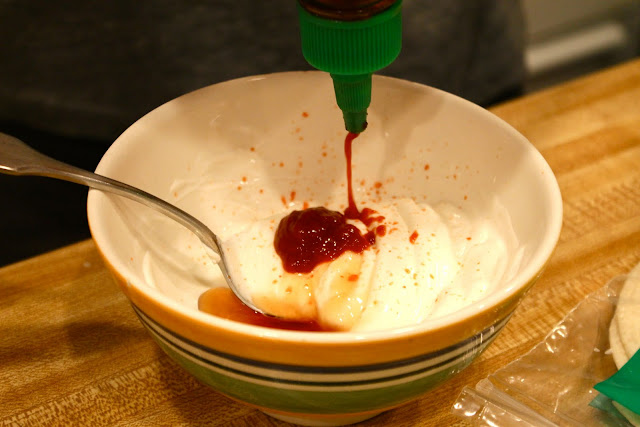 I then made my sweet chili sour cream. I mixed a few spoonfuls of sour cream with a spoonful of Greek yogurt. I then mixed in honey and sriracha chili sauce, mixing until fully incorporated so the sauce turns pink. I tasted a few times to get the desired balance of sweet and spice and set aside. 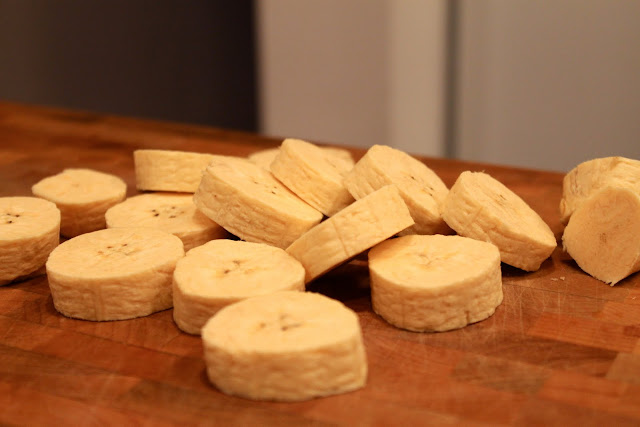 I then went to work on the plantains. I've only worked with plantains a couple of times before, and unfortunately, the one I bought was not ripe, but I made do with what I had to work with. I peeled it and sliced it into quarter inch thick slices. I then heated some vegetable oil up in my heavy bottom dutch oven pot, and once the oil began to sizzle around the test slice I put in, I dumped in the rest of the plantains, careful not to splatter the oil. 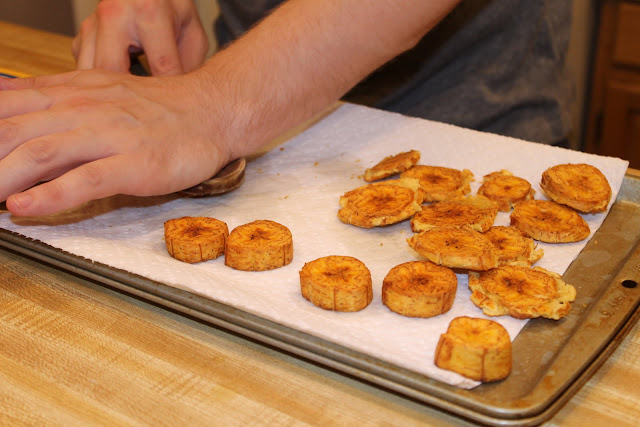 Once the plantains were golden in color, I removed them from the oil, pressed them flat with the back of a wooden spoon. I have read in recipes that this is a good way to ensure they cook through and are crisp on the outside and soft on the inside. 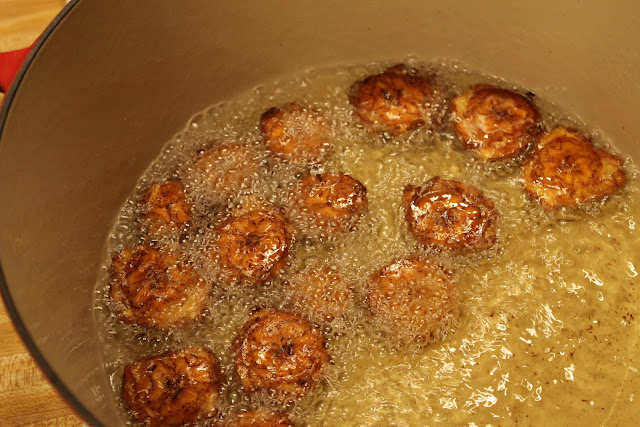 To finish them off, I put the smashed plantains back in the oil until they were a golden brown, and then placed them on paper towel to soak up the oil. Unfortunately, because the plantain was unripe, the chips didn't have the desired crisp outside and soft inside, but they tasted good with a little salt, dipped in the sweet chili sauce. Next time I'll be sure to find a ripe plantain before I make the chips. 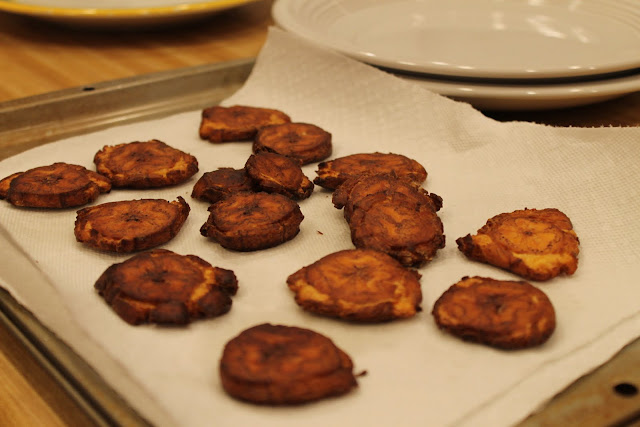 While I was cooking the plantains, I heated the broiler and put the seasoned fish in for about 15 minutes until the flesh flaked with a fork. I let it sit to finish cooking and then flaked it all so that I could construct my tacos. While it was sitting, I wrapped the flour tortillas in aluminum foil and heated them in a warm oven. 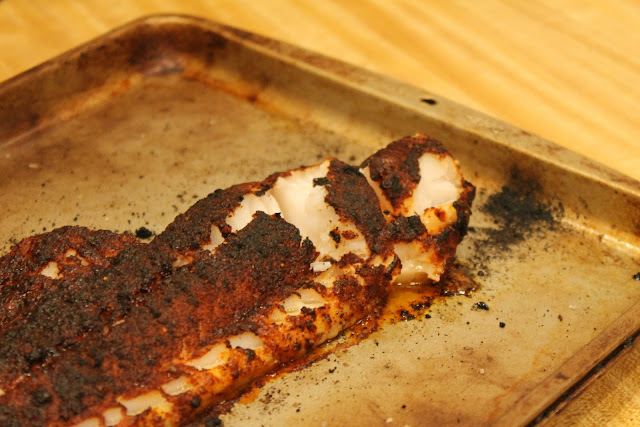 The tacos turned out very well. They were simple but very flavorful. The spice mix gave the fish a nice kick which was amplified by the sweet chili sauce. The avocado has a nice balance of citrus and saltiness that offset the spice of the fish and sauce. The cucumber salad was very bright and refreshing, and the plantains, though dry, had a nice saltiness that contrasted the vinegar bite of the cucumber salad. 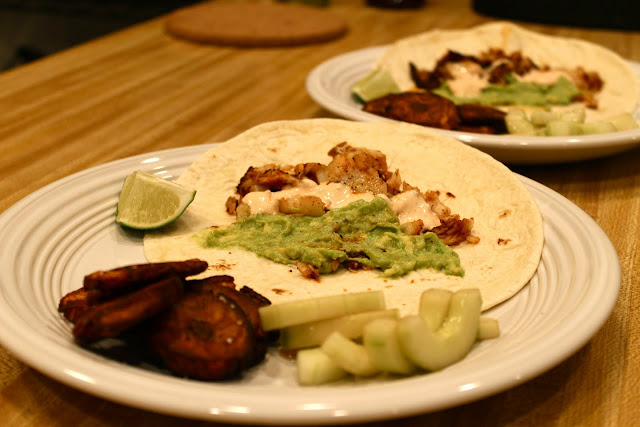