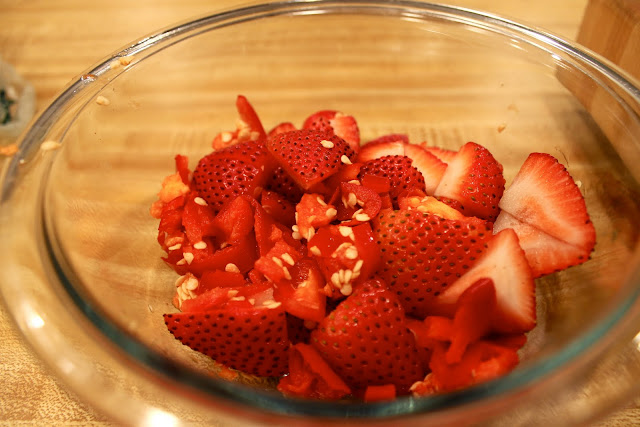 Summertime and berries. They go together like... berries and summertime? I was in the mood to make a dish that featured some fresh fruit. I decided to get a nice bone-in pork chop, as pork lends itself very well to the flavors of fresh fruit. I also wanted some spice, so I picked up some spicy red peppers. To go along side this spicy, fruity, porky dish, I wanted some potatoes and brussel sprouts.

For the strawberries, I cut them up with the pepper and put them in a small saucepan with some honey and white wine. I let this cook down until the berries and peppers were falling apart and the mix could be crushed with a wooden spoon. 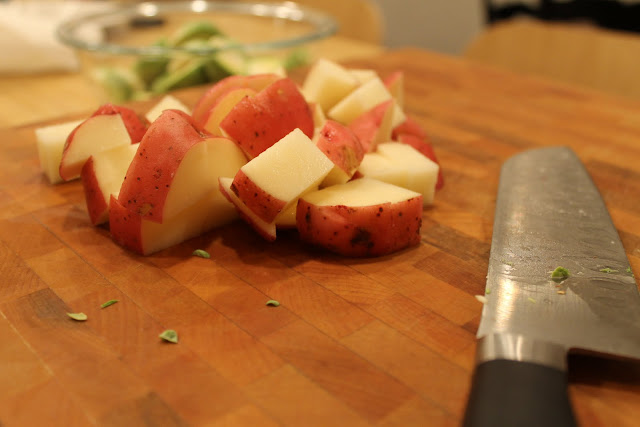 I cut up the potatoes and put them in a fry pan with about half an inch of salted water. I love cooking potatoes this way because they have a really great starchy and salty flavor. I cooked the potatoes until the water evaporates and then add olive oil to the pan and saute the potatoes until they start to brown. The pan ends up getting brown because of the burning starch, so it's important to toss the potatoes frequently so they don't burn or stick to the pan. Once the potatoes were nice and brown, I removed them and added on white wine to deglaze the pan. I scraped up all of the burned starch, cooked the wine to burn off the alcohol, and pour the "potato gravy" over the cooked spuds. 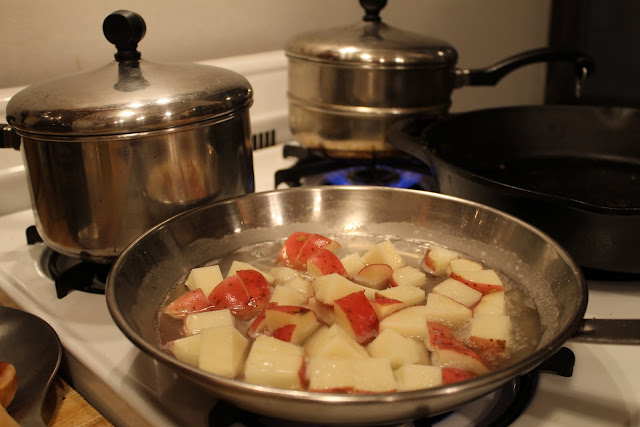 For the brussel sprouts, I cut them in half and quickly blanched them until they started to become bright green. I then cooked them with capers in canola oil in a hot cast iron until the browned and the capers were crispy. 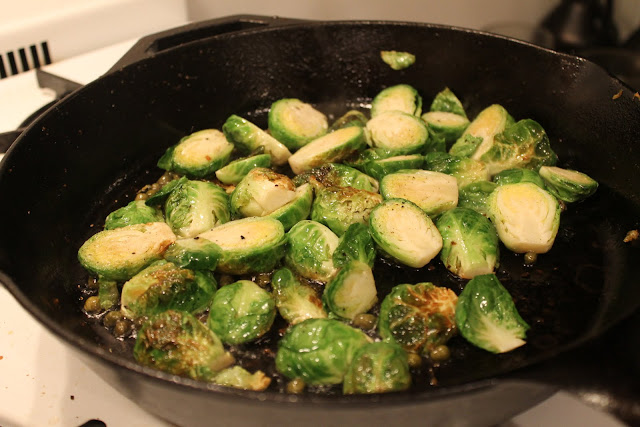 Once the brussel sprouts were done, I cooked the pork. I had coated the chop in salt, pepper, and panko crumbs to give it a breaded exterior. I set the heat on the cast iron to medium high and started cooking the pork. I flipped it after about 6 or 7 minutes when the bread crumbs were nice and golden. I cooked the other side 7 minutes, and pressed on the meat to see if it was done. When the meat was firm enough, I took it off, let it sit for 5 minutes to finish cooking and let the juices settle, and then spooned some of the strawberry mixture on top. 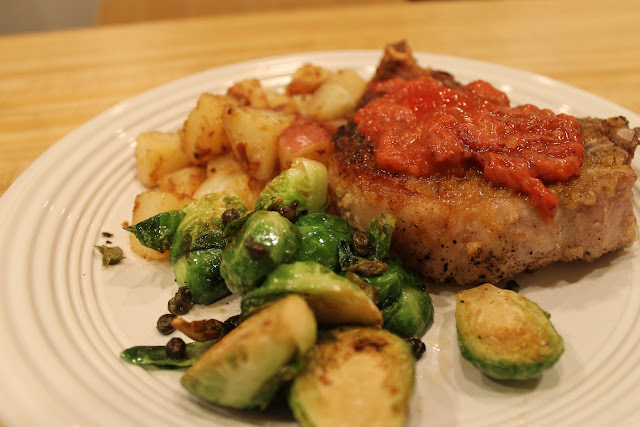 The dish turned out really well. The potatoes were very tasty and the capers gave the brussel sprouts a nice pungent but not overpowering kick. The strawberry sauce and pork worked nicely together. The sauce had a nice balance of spicy and sweet (though it could have used a bit more sweet to give it further balance) and the mild sweetness of the pork complemented the powerful flavor of the sauce. All in all, a great dish that looks tough but really isn't that work intensive or time consuming.
Posted by Ty's Kitchen at 10:20 PM

This dish has everything I love. Pork, strawberries, brussel sprouts, and potatoes. What more could we ask for. Thanks for posting, looks delish, I am now following. =]