Is that watermelon in a sandwich?? 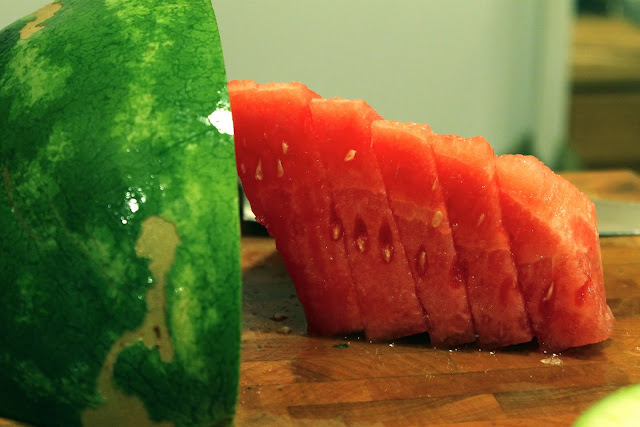 It sure is! I love the flavor of watermelon in the summer. It's a melon with such a sweet flavor and interesting mouthfeel. Whenever I have some watermelon, I'm instantly transported to somewhere near the beach (figuratively, otherwise I would be eating watermelon non-stop...) Watermelon is normally eaten in wedges or cut up pieces. For this meal, I wanted to use it in an unconventional way. I decided to pair the sweet watermelon with the salty, meatiness of sausages in a sandwich. To go alongside this unconventional sandwich pairing, I decided to make some fried zucchini to make a sandwich and some chips a truly unexpected meal. 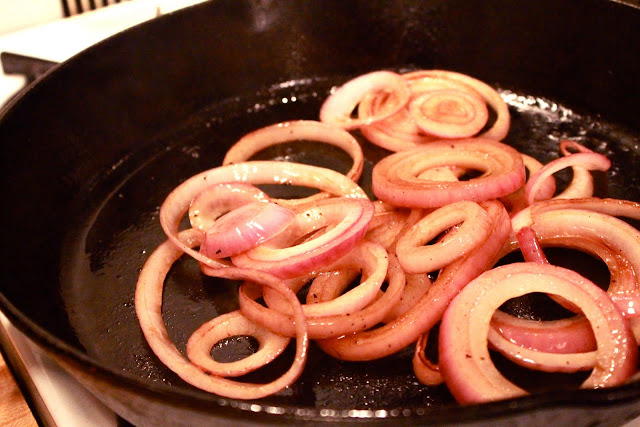 To go along with the sausage and watermelon, I wanted to make some sauteed red onions. These would act as the halfway point between the sausage and the watermelon. Onions have a sweetness that comes out as they cook. They are also often served cooked with sausages, or raw in watermelon salads. For the sandwich, I pictured onions as the mutual friend, introducing watermelon and sausage to each other at a dinner party. I sliced the onions into rings, and sauteed them over medium high in olive oil, salt and pepper. 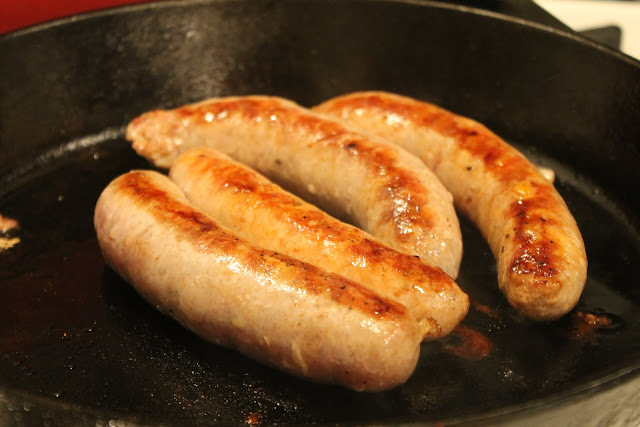 I then cooked the sausages in my cast iron until they were brown and firm. Once they were cooked, I set them aside, and when I was ready to construct the sandwich, I sliced them on a bias into thin pieces. 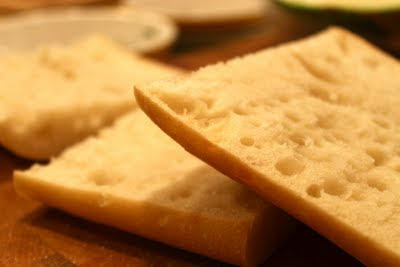 For the bread, I bought a ciabatta roll and sliced it the long way. I drizzled some olive oil over the slices and toasted them. I wanted to toast them so that they wouldn't get soggy from the juices of the watermelon. 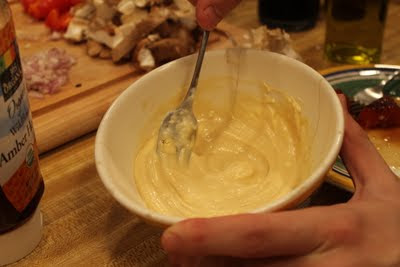 I also made a honey mustard sauce by mixing Dijon mustard, mayo and honey. This made a nice creamy sauce that had a sweetness from the honey and a bite from the mustard that were both evened out by the mayo. I also chopped up some cilantro to go on top of the sandwich. 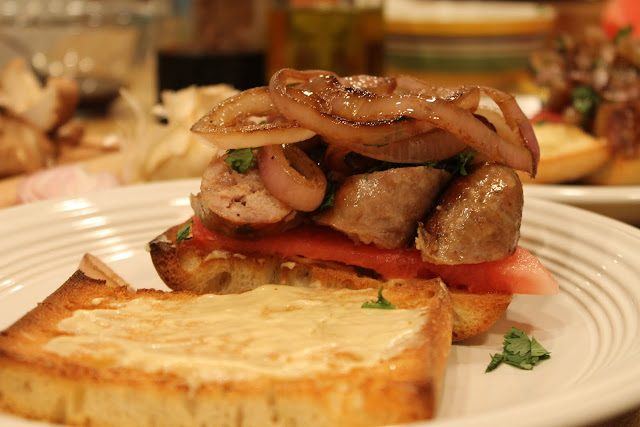 Once I had all the components of the sandwich ready to go, I went to work on the zucchini. 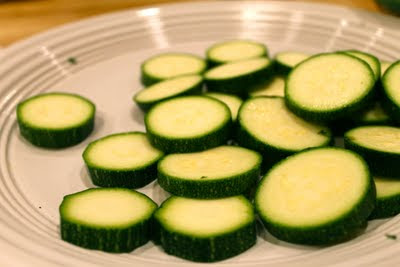 I cut the zucchini into thin discs and set them aside until I was ready to get them in the batter. 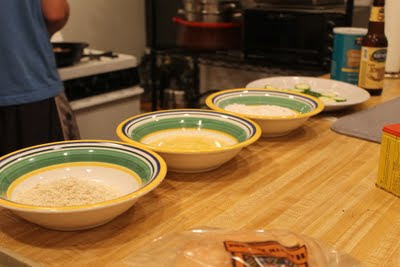 For the batter, I set three bowls up. The first had flour, salt, and pepper; In the second, I mixed 2 eggs with a little beer to thin the mixture out; for the third, I used panko bread crumbs. 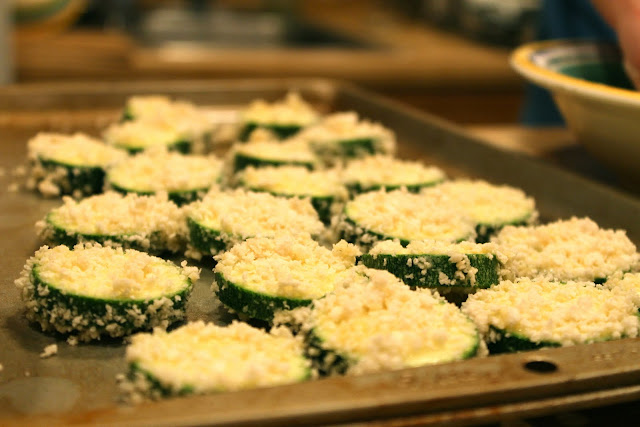 I dipped the zucchini discs in each bowl successively and set them on a pan while I heated vegetable oil in my heavy bottom dutch oven. 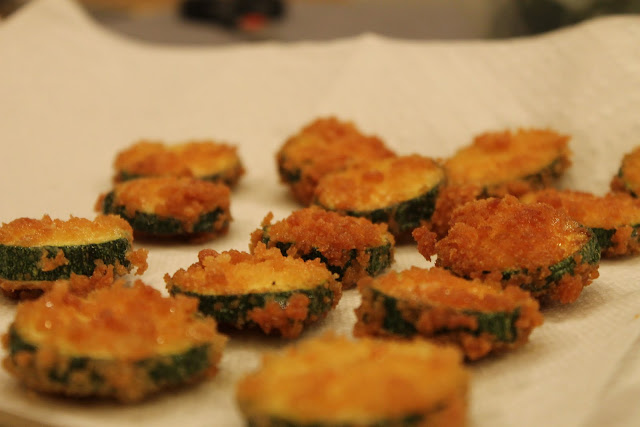 I cooked the zucchini chips in 2 batches, careful not to overcrowd the pan. I flipped them in the oil after about 3-4 minutes once they were brown. After about 1-2 more minutes, I took them out and laid them on paper towel to absorb the oil. I served the zucchini chips alongside the sandwich with the honey mustard as a dipping sauce. 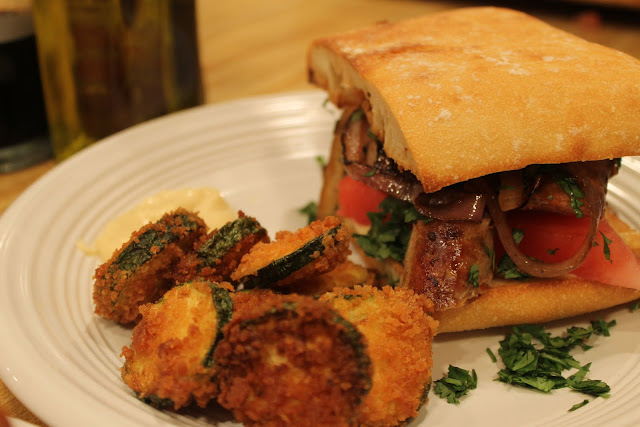 The sandwiches came out really well. The contrast in flavor and texture of the watermelon and sausage made for a very interesting sandwich experience. All of the flavors in the sandwich mixed very well, but we unexpected, so that each bite was a unique experience depending on which element was the first to hit the tongue. The zucchini chips were a nice accompaniment to the sandwich. They were crispy and light and went very well with the honey mustard dipping sauce. The meal was unexpected and delicious, and I definitely suggest using watermelon in unusual fashions while it's still in season.
Posted by Ty's Kitchen at 9:58 AM

Please FedEx one of these to me immediately