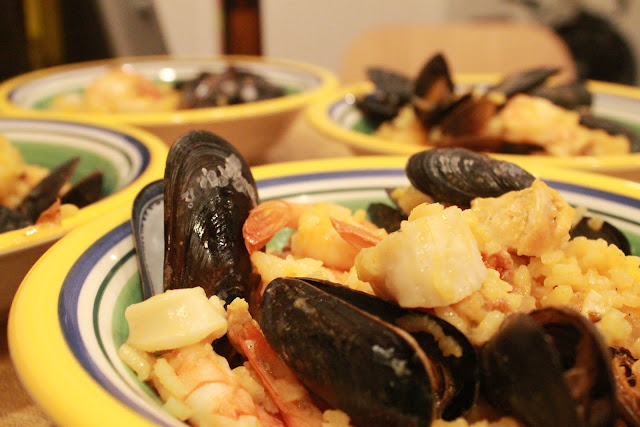 Paella is a really delicious seafood and rice dish that originated in Spain. One of the most interesting aspects of this dish is it's versatility. You can make paella with all different types of seafood and meat, from lobster or cod to ham or chicken. The one constant for all paella dishes is having rice and saffron. Saffron, though expensive to purchase, is a really great seasoning that adds a very unique flavor and a nice yellow coloring to a dish. For my paella, I decided to use shrimp, scallops, calamari, mussels, chicken, and chorizo sausage. I also want to thank my friend Tim for doing a great job as my stand-in food photographer. 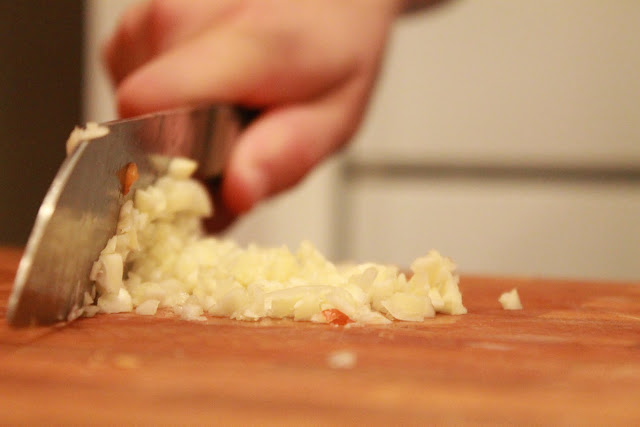 To start the meal, I prepped my vegetables, chopping onion, red pepper, garlic, and tomatoes. I then cooked the sausage and chicken in my heavy bottom dutch oven pot. I wanted to cook the chicken and sausage before everything else to ensure that it was fully cooked when the dish was done. Once the rice is on for the dish, it only takes about 30 minutes to cook, not necessarily long enough to cook the chicken or sausage through. While the meat was cooking, I cut up the calamari, and set them aside with the shrimp (I bought frozen peeled shrimp) and scallops. 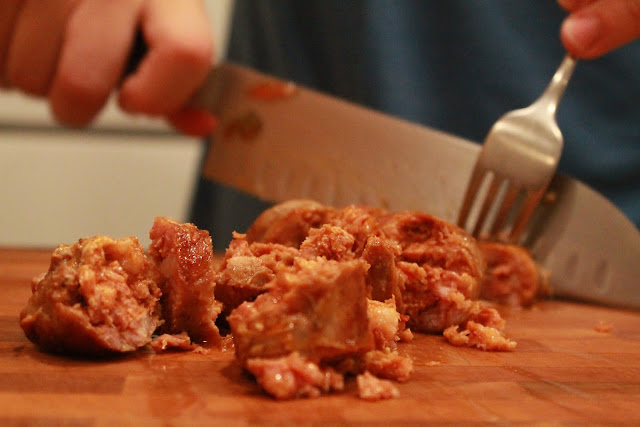 Once the meat was cooked, I sauteed the onions and pepper in olive oil until translucent and then added the garlic and tomatoes. After about 5 minutes, I added the rice (I used 2 cups of rice for 7 people), tossing it in the sauteed veggies and olive oil. 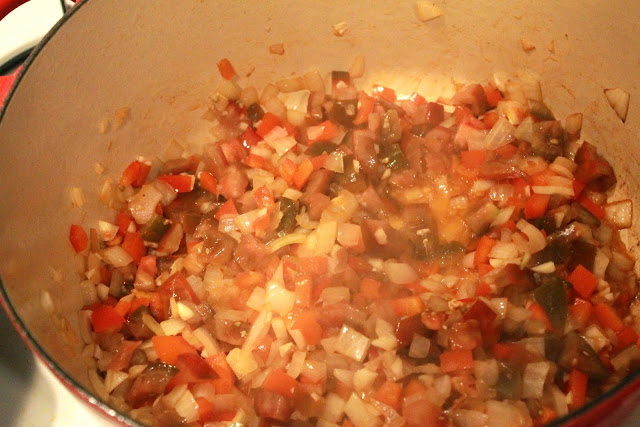 For the liquid, I used 2 cups of fish stock and 2 cups of chicken stock. Because both fish and meat are in this dish, I figured it would only be appropriate to have both of them represented in the broth. After I added the broth, I put in 2 tablespoons of smoky paprika, and a teaspoon of saffron. Saffron is a very expensive spice, but it packs a lot of flavor and color. It's widely used in Spanish and Mediterranean cooking and adds a really distinct flavor to a dish. Use sparingly! 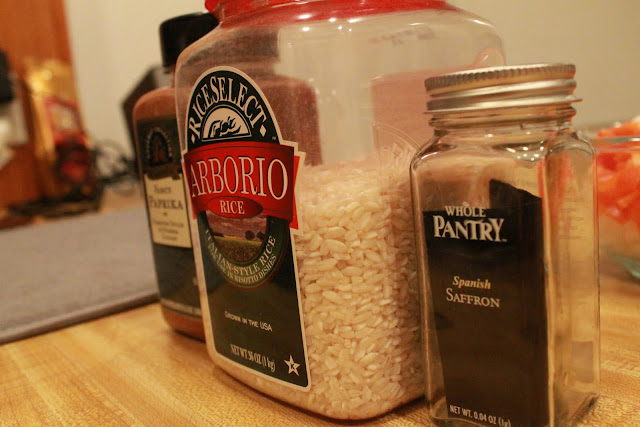 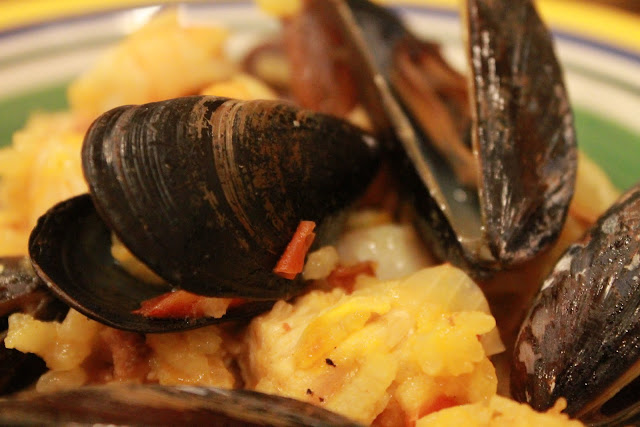 To go along with this Spanish dish, we decided to make some sangria, a classic Spanish drink. Sangria is made with cut up fruit, wine, triple sec, brandy, and seltzer. 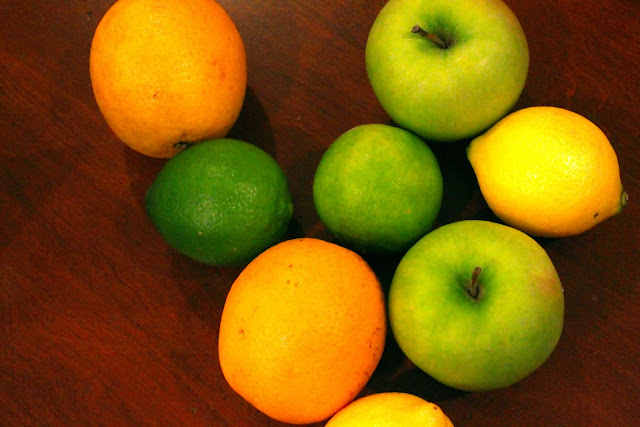 I was not at the helm of making the sangria, so I don't know the proportions, but it was delicious and accompanied the paella really well. 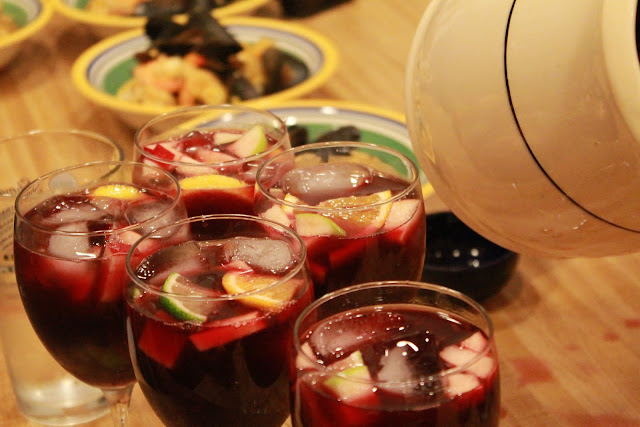 The meal was a lot of fun. We all enjoyed the Spanish food and drinks and had a great time eating, talking, and laughing. The paella was very tasty, and the mix of seafood and meat made it a hearty summer meal. 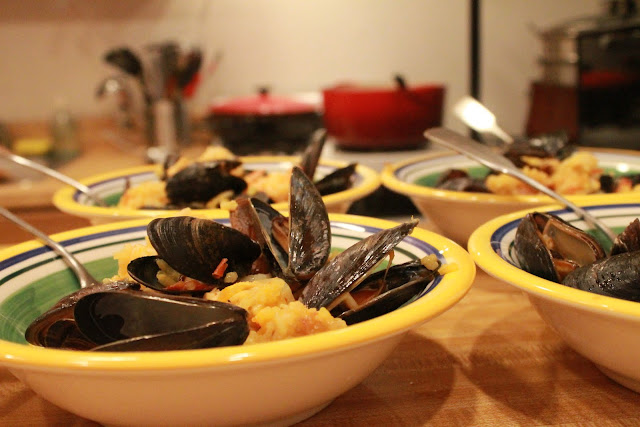 This paella looks delicious. I have yet to try my skills at this, but I first would have to get my hands on some good fresh seafood. Would have liked to taste this-no doubt this meal was very enjoyable!