Move Over, Burger and Fries 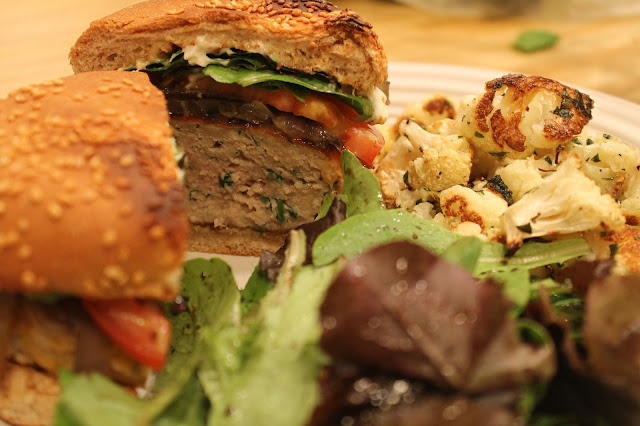 I love a good burger and fries, but often times the fat and grease outweigh the deliciousness of a juicy beef burger and fried potatoes. Enter the turkey burger with roasted cauliflower. Turkey burgers can be tricky to make because they easily dry out, and you really can't undercook them because nobody wants to or should eat rare turkey meat. If done well, turkey burgers are a great alternative to beef. 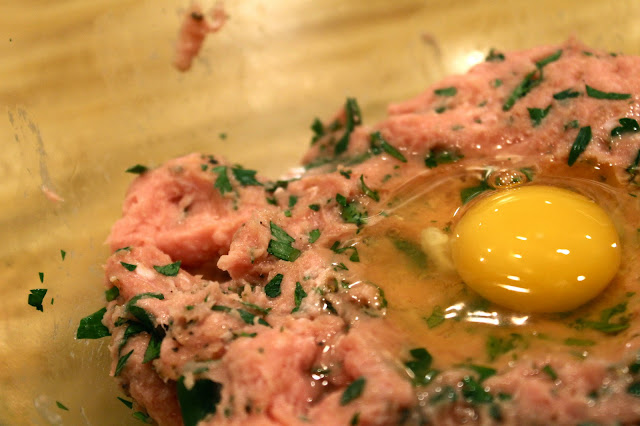 Mixing in an egg helps immensely in maintaining moisture in the burger and giving it a thicker consistency so it doesn't fall apart when you're cooking it. For this burger, I mixed a pound of ground turkey with about half a cup of parsley, a teaspoon of worcestershire sauce, salt, pepper, 1 egg, and 3/4 a cup of panko. I mixed this all together by hand (TIP: to keep the turkey meat from sticking to your hand a lot, get your hand wet before handling) and formed 4 patties. I set these on a plate and put in the fridge to set while I prepped the cauliflower. Getting the patties cold helps keep them together when you cook as well. 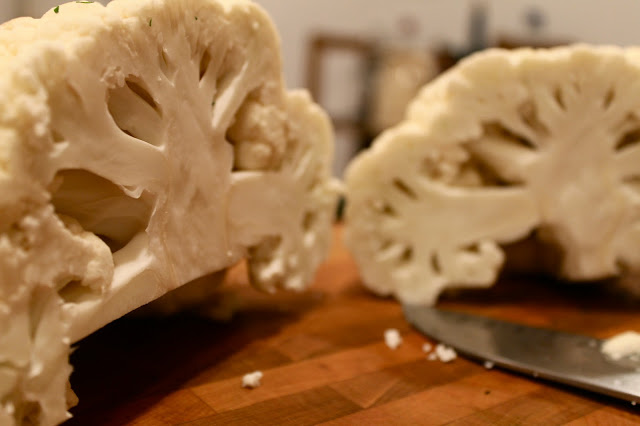 I love cauliflower. It has a nice mild flavor, and is a little sturdier than broccoli to cut up and cook with. For the roasted cauliflower, I removed the green base of the head of cauliflower, halved it, and cut out the chunky stem where possible. I then ripped the top part at the stems to make small florets. I used the remaining half cup of parsley that I had chopped from the burger, and tossed it with the florets, olive oil, salt, pepper, and 4 cloves of garlic sliced very thinly across the horizontal axis. I pre-heat the oven to 425, and roasted the cauliflower for 25 minutes until the tops started to brown and the bottoms were nice and crispy. 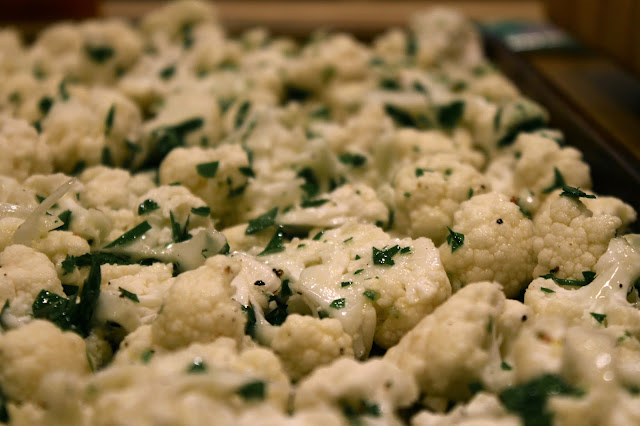 To go along with the burgers, I sauteed some onions in my small cast iron. I halved a red onion, and sliced it thin. I heated about a quarter of a tablespoon of butter and a tablespoon of olive oil in the pan and once hot, added the onions. I cooked them down on medium low heat until starting to brown. 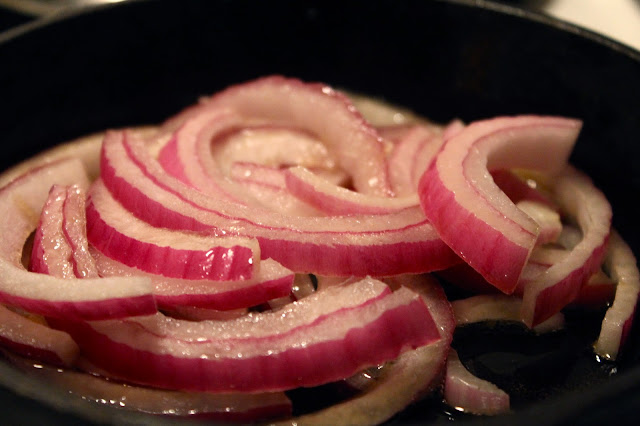 When I was ready to cook the burgers, I heated my big cast iron pan, and added canola oil. I carefully placed the burgers in the pan and covered it. I cooked the first side for about 7-8 minutes and flipped. The first side was beautifully browned. I covered the pan again and cooked for about 4-5 more minutes, added some cheddar slices, covered, and cooked for a final minute. Once the cheese was fully melted, I took the burgers out of the pan and set aside. 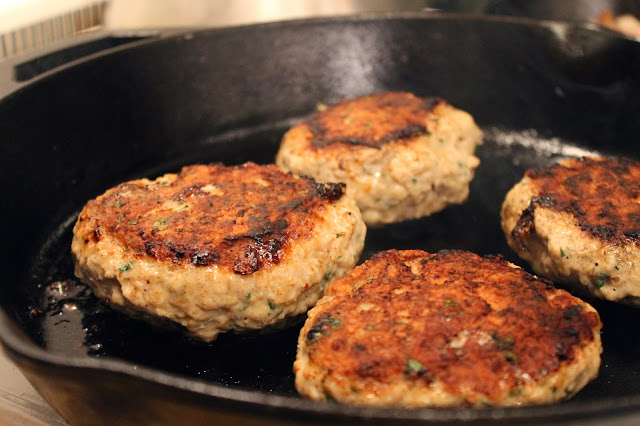 While the burger was cooking, I buttered the sesame seed buns I had purchased and toasted them. I  sliced a tomato to top the burger, and made a small, mixed lettuce salad with olive oil and balsamic as another simple, tasty side for the dish. 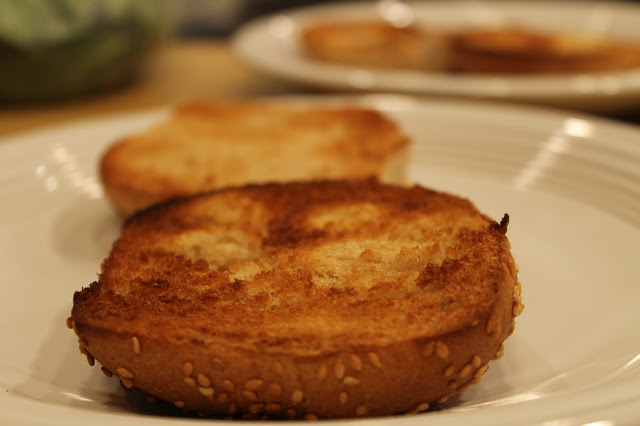 I placed the burgers on the buns, topped with some onion, tomato, and lettuce. 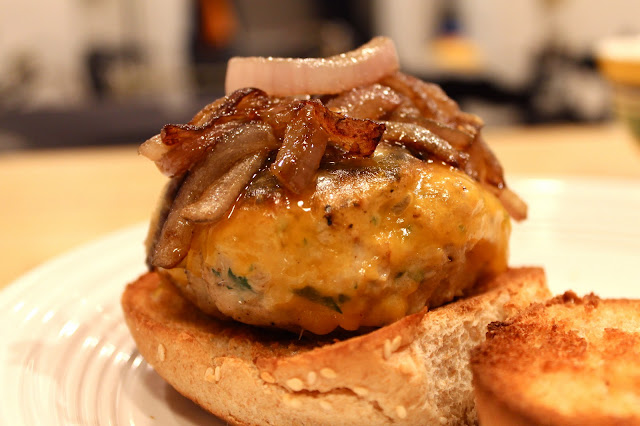 For condiments, I went with mayo and mustard, but any condiment would work with this burger. Once my burger was constructed, I spooned some of the roasted cauliflower and the salad on the plate. 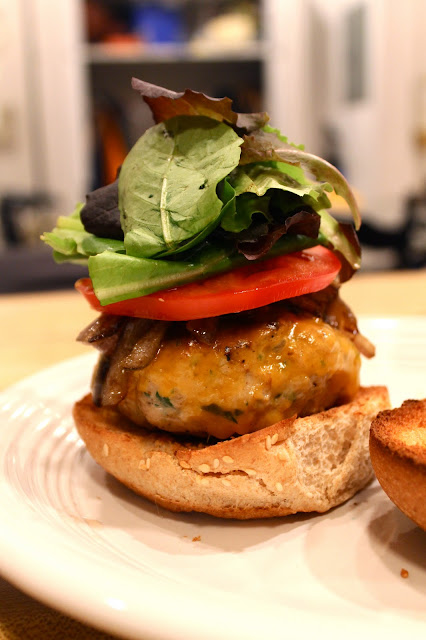 The burgers and cauliflower were awesome. The burger was juicy and flavorful. The turkey had a nice mild taste that worked with the parsley and onions, and the buns were perfectly crisp and buttery. The cauliflower was very flavorful. The roasted garlic sliced provided a crunchy burst of flavor, and the florets were perfectly browned and crispy on one side and soft on the other. The salad was also a nice side as it was bright and clean, and the vinegar provided a nice cut to the warm flavors of the other dish elements. While I'll never get over my feelings towards a traditional burger and fries, turkey burgers can be a really good substitute that's far less fatty and greasy than the alternative. 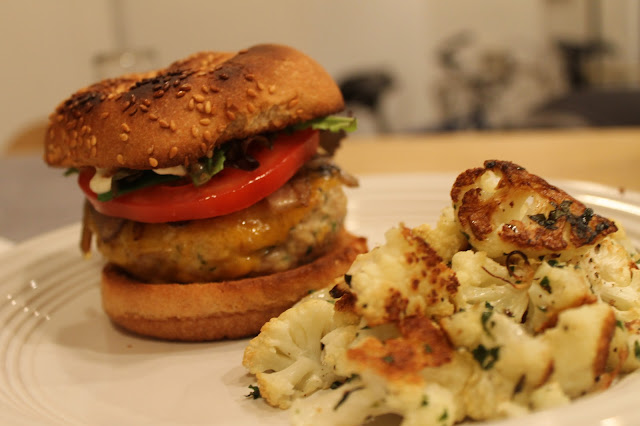 This is the BEST turkey burger I've ever eaten, and I've had many. It's perfectly juicy and full of flavor.... SO GOOD!!