An Ode to Autumn at the Beach 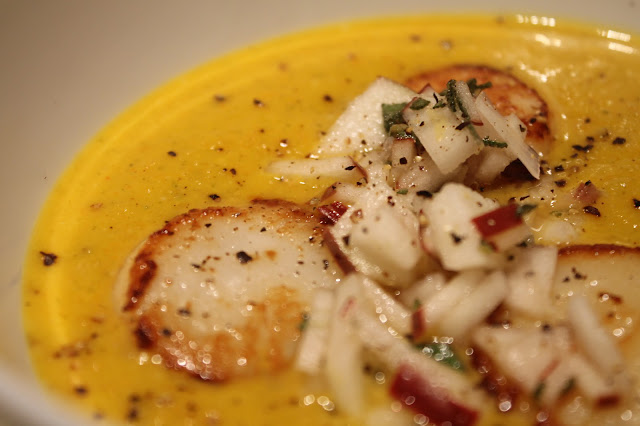 The flavors of Fall are warm, rich, and crisp. This past weekend, I went down to Cape May to relax with my girlfriend, and I made a dish that celebrated both autumnal and beach side ingredients. I chose scallops over butternut squash soup with a crisp apple slaw. The warmth of the squash blended perfectly with the caramelized scallops, and the apple brought a bright flavor to cut into the rich soup and shellfish. 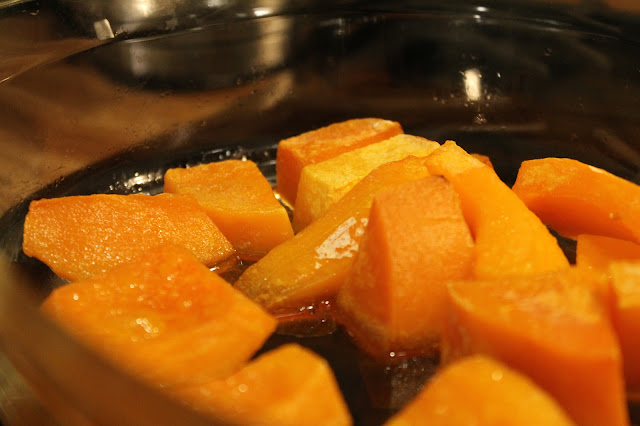 I started by making the soup. I bought pre-cut butternut squash pieces, and roasted them in the oven at 375 for 40 minutes until they were tender and starting to brown. I then chopped up a carrot, a quarter of a yellow onion, and 2 cloves of garlic. 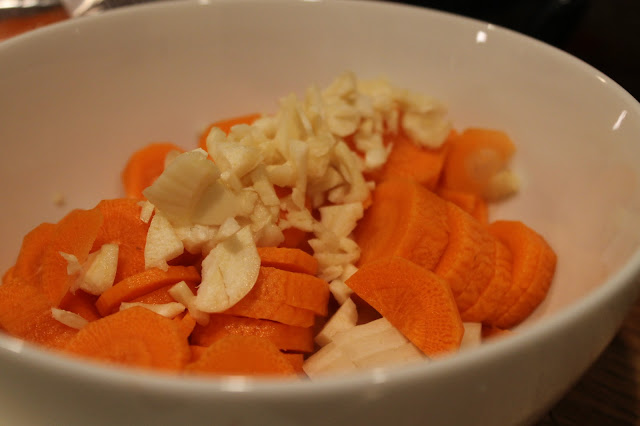 For seasoning, I bought some sage leaves to add richness to the soup. Sage is a very distinct herb that has a velvety feel and a flavor to match. I don't use a lot of sage in my cooking, but I really enjoy the rich flavor it brings to a dish. It usually goes well with dishes such as veal, cannellini beans, or squash as they have mild flavor that lends well to the taste of sage. 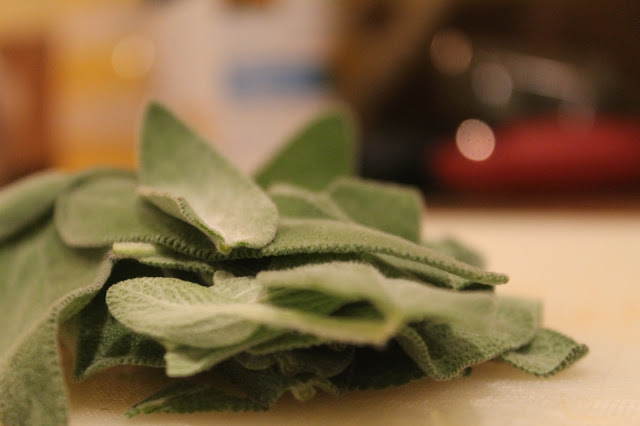 I chopped up the sage and sauteed it in olive oil along with the vegetables in a medium pot. Once the veggies became soft and the onions translucent, I added the squash, a teaspoon of cayenne pepper, and a teaspoon of cinnamon, cooked it for another few minutes and added about a cup and a half of chicken broth. 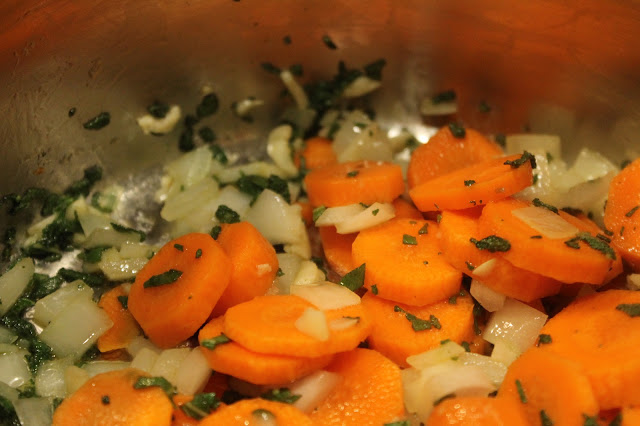 I carefully poured the mixture into a blender and blended until totally smooth. I kept the spout of the blender open to let out the steam as the soup was still hot. 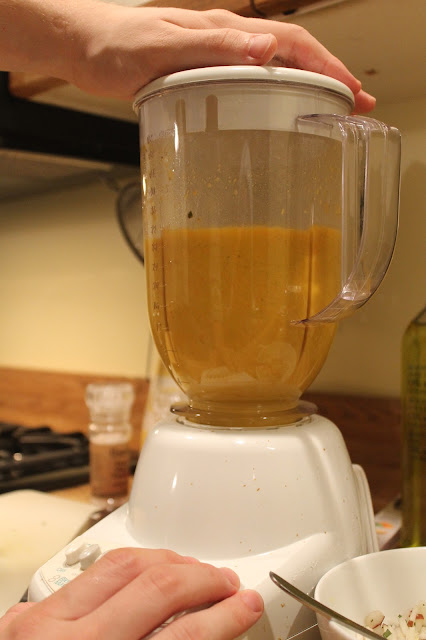 Once blended, I added the soup back to the pot and added about half a cup of cream. I stirred this in and let it simmer for about 15 minutes so the flavors could blend. 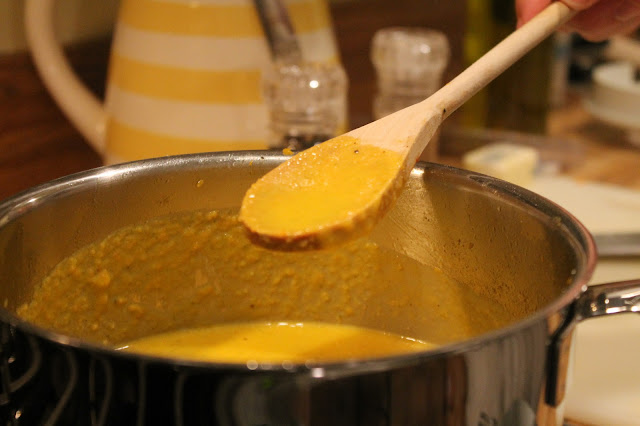 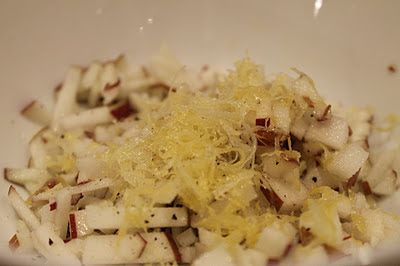 To spice up the soup and scallops, I made an apple slaw. This acts as a nice garnish but also serves a purpose in the flavor profile of the dish. The squash soup and scallops have very rich warm flavors, so I wanted something to cut that with some bright citrus. 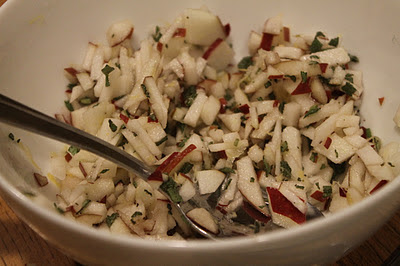 To make the slaw, I finely chopped a Macoun apple, mixed in some diced sage leaves left over from the soup, and grated some lemon zest of it. I then poured about a tablespoon of red wine vinegar and squeezed half a lemon. I mixed in a little granulated sugar and some salt and pepper and set it aside to build flavor until the dish was done. 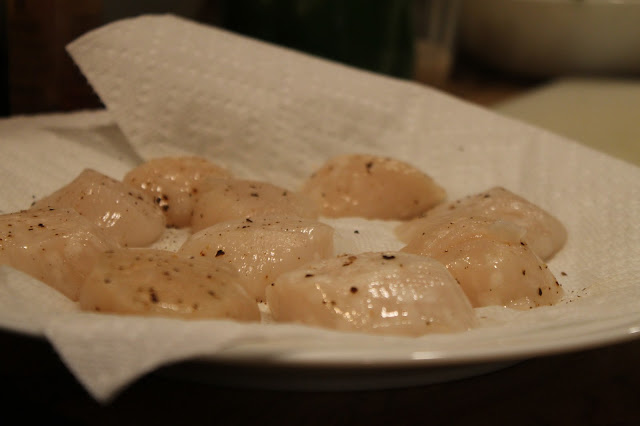 For the scallops, I patted them dry with paper towel and rubbed them with a bit of salt and pepper. I heated oil and butter in a skillet. I let the oil and butter heat up on medium high until the butter was bubbling. I then added the scallops spread out from each other in the pan. When cooking scallops, you don't want them too close together or they will steam and can get rubbery. After about 4 minutes, when the scallops we beautifully brown and caramelized, I flipped the scallops with a spatula and finished them on the other side for another 3 minutes. 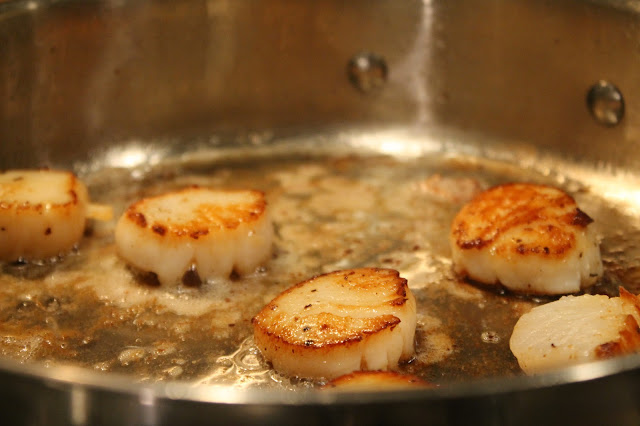 I spooned soup into bowls, carefully placed the scallops on top of the soup so they were above the surface. I then spooned the apple slaw on top and ground some black pepper to finish it off. 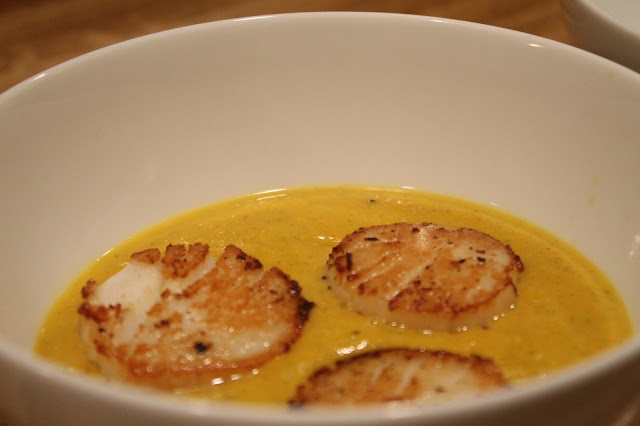 The dish was excellent. The soup was simple and tasty with a slight kick from the cayenne pepper. The rich natural saltiness of the scallops worked perfectly with the buttery soup, and the apple slaw provided the perfect amount of bite to keep the dish from being too rich and heavy. The faint flavor of sage permeated the soup and played well with the sharp flavor of the lemon and apple in the slaw. This dish was not that difficult and really captured the essence of fall and the beach and intertwined the two seamlessly. 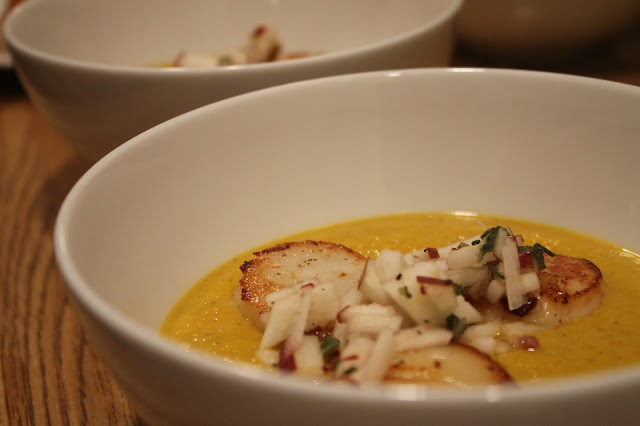 I made this for a couple friends this week, and it was easy and delicious, as advertised! I never would've thought to pair scallops with butternut squash soup, but it was a terrific combo. Thanks for the creative idea!

Glad you liked the soup and scallop combo! One of my favorite things about scallops is how versatile they are.