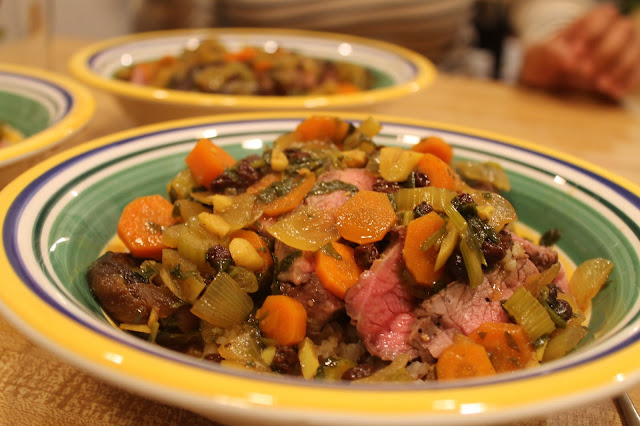 This past weekend, I was in Whole Foods with my friend Heath, picking up some food for dinner. I was feeling very indecisive in what I wanted to make, so Heath suggested making some sort of lamb tagine. A tagine is a north African dish that is named after the clay pot it is usually served in. You don't need a tagine to make the dish, but whether using one or not, it is a slow cooked dish, usually made with lamb or chicken braised in a sauce with dried fruit (apricots, currants, dates), chicken broth, vegetables and spices such as turmeric, cinnamon, and coriander. It is very good served over couscous, quinoa or bulgar wheat.

This is a typical tagine pot:


For this specific dish, I didn't have enough time to braise the meat as that would take 2-3 hours, so I decided to make lamb steaks with a tagine style sauce. There were four of us eating dinner, so I picked up a pound and a half of lamb steak, and for the sauce, bought carrot, celery, onion, cilantro, apricot, currant, garlic, and chicken broth. 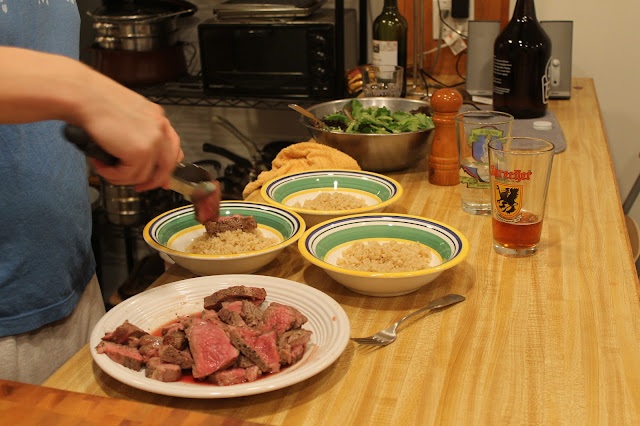 The sauce was incredibly easy to make, I chopped up a medium onion, 2 carrots, 3 celery ribs, 2 cloves of garlic and a cup of cilantro. I then heated olive oil in my heavy bottom crock pot, and sauteed the carrot, celery and onion. Once they became translucent, I added the garlic and cooked for a few more minutes. I added about 2 tablespoons of turmeric, 2 tablespoons of coriander, and 1 tablespoon of cinnamon, along with salt and pepper to taste and stirred it through. I poured in about 2 tablespoons of apple cider vinegar and scraped up the brown bits on the bottom of the pot. I then added 2 cups of chicken stock, the cilantro, a cup of dried apricots, and a half cup of dried currants. I turned the heat to medium low and let the sauce cook down for about 30 minutes. 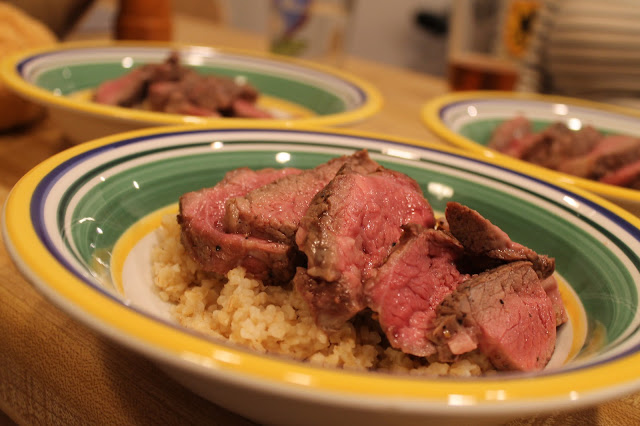 While the sauce was cooking, I rubbed the lamb steaks with salt and pepper and heated my cast iron pan. I browned the outside of the lamb on one side for 3 minutes, flipped it, and put it in the oven at 375 for 12 minutes until the meat was medium rare. Once the meat was cooked, I let it sit for 10 minutes to let the juices settle and then sliced it. For the grain, I made bulgar wheat, which is a really tasty and hearty grain. Cooking it is very simple, I brought 2 cups of chicken broth to a boil and added one cup of bulgar, then reduced to a simmer for 15-20 minutes until all of the liquid was absorbed. Once the components were done, I spooned some bulgar in a bowl, placed slices of lamb on top and spooned the tagine sauce on top. 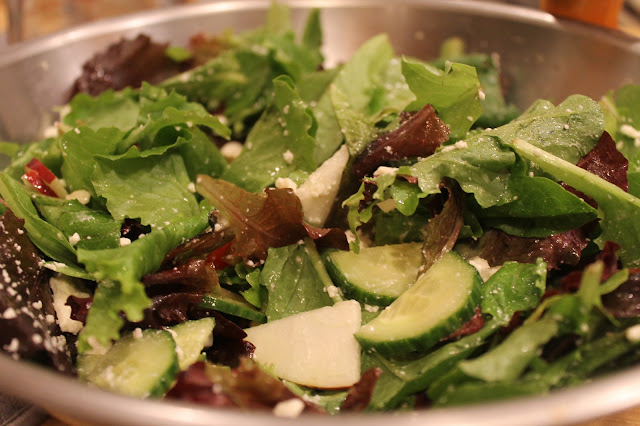 As a side, I made a salad with cuke, tomato, apple, and feta, and made a dressing of lemon juice, vinegar, Dijon mustard, and olive oil. The meal was delicious. The lamb steak was an interesting take on the tagine, as it was much tougher than a braised meat, but very juicy and flavorful. The sauce had a nice sweetness and the turmeric gave it a distinct North African feel. The salad was a nice, bright accompaniment to the warm lamb dish. Recipe after the break.