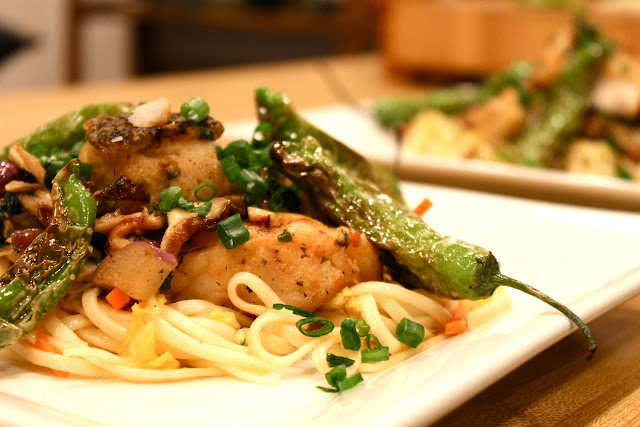 Asian flavors are beautiful to cook with. They mix a balance of sweet and spicy, tangy and tart. With this dish, I was trying to capture the interesting blends of Asian style cooking and use a lot of vegetables for a healthy dish that is out of the ordinary. The dish had four components, crispy tilefish (a mild whitefish that is similar to snapper), stir fried eggplant and mixed mushrooms, cabbage and carrot udon noodles, and fried shishito peppers. While this sounds like a lot to prepare, the dish didn't take too long, and the result was a tasty dish with a lot of personality. 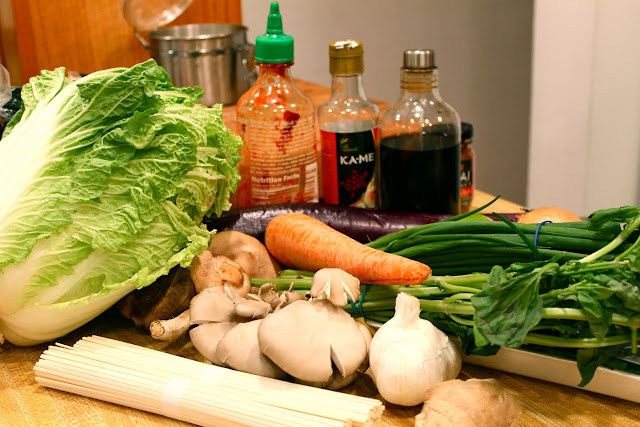 Some vegetables lend themselves well to Asian flavors. Cabbage, carrots, mushrooms, eggplant have distinct flavors that blend well with the saltiness of soy and fish sauce, bright tang of ginger and lime, and spice of chili sauce. Adding scallion and basil brings out even more flavor and brings the dish over the top. 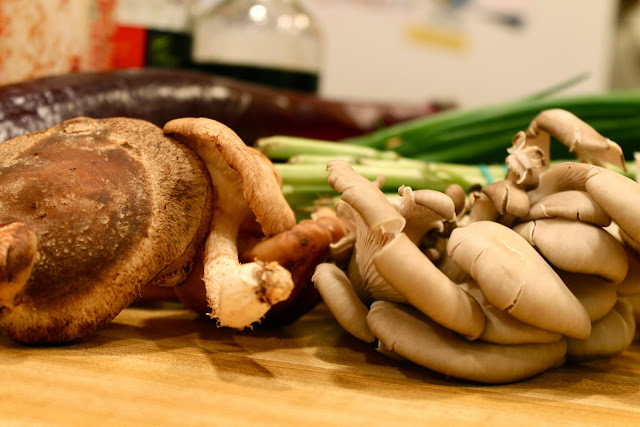 I especially love using different types of mushrooms. Different mushrooms bring out different levels of earthy flavor. Shitakes are regularly used in Asian cooking, and as I was shopping for them, I saw some beautiful oyster mushrooms. Oyster mushrooms are beautiful to look at, and bring out a nice strong flavor that isn't overpowering like truffles or even porcinis, but still is very distinct. For the eggplant and mushrooms, I sliced them up, shaved some ginger, and stir fried them in canola oil with ginger, basil, scallion, lime, soy sauce, fish sauce, and sriracha sauce. 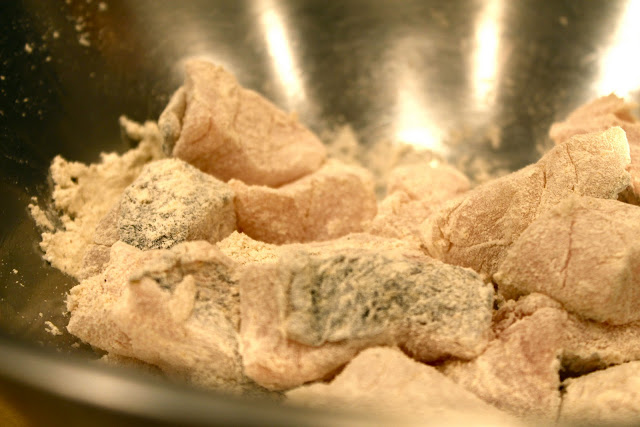 For the crispy fish, I cut the tilefish filet into 1 inch pieces, and dredged them with with a mix of flour, ground ginger, coriander, salt, and pepper. I tossed to coat the fish, and heated about 1/2 cup of canola oil in my wok. Once the oil was hot, I added the fish and fried until it browned on one side, flipped it to brown on the other side and set on some paper towel to absorb the oil. I cooked the fish in 2 batches to make sure it wasn't too crowded and the fish didn't steam. 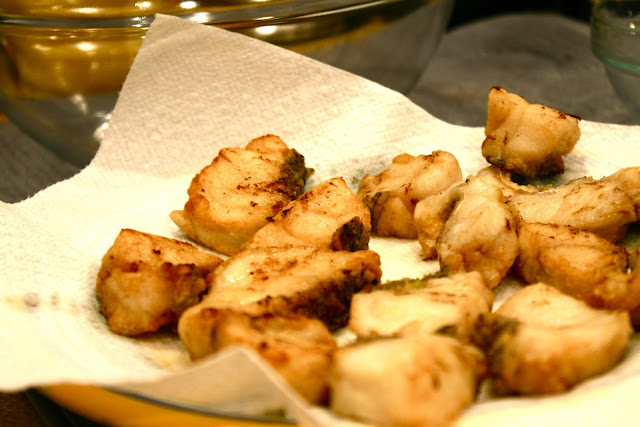 I then added the peppers to the oil and fried until browned all over. Once the peppers were done, I sprinkled them with salt and squeezed a little lime over them. Shishito peppers are a delicious side. I've had them at Ippudo, one of my favorite ramen restaurants. They're not spicy at all, just sweet with a slight bite from the seeds. 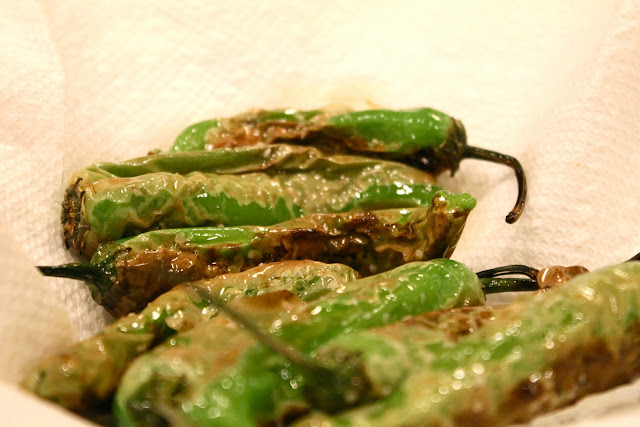 For the udon noodles, I boiled them for 6 minutes, and then dumped them in a bowl of ice water to stop the cooking. I then sliced the cabbage and carrots finely, sauteed them with some canola oil and fish sauce, added the noodles in and mixed to coat. Once the noodles were done, I spooned them on the plates, spooned the eggplant and mushroom mixture on top, then the fish and the peppers, and garnished with the scallions. The dish was really tasty and had a very light Asian flavor. This version isn't bvery spicy, but you can adjust the spice as needed with the sriracha sauce. 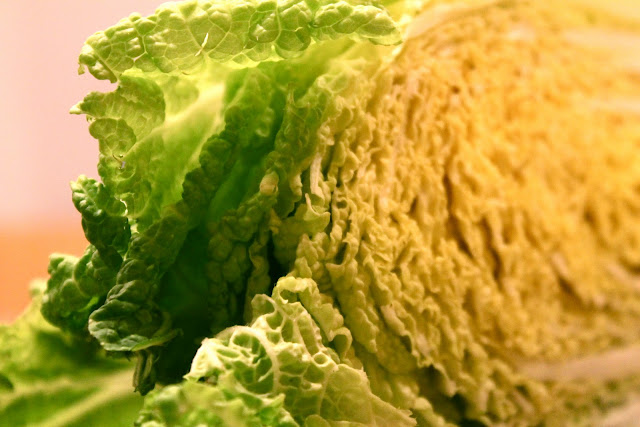 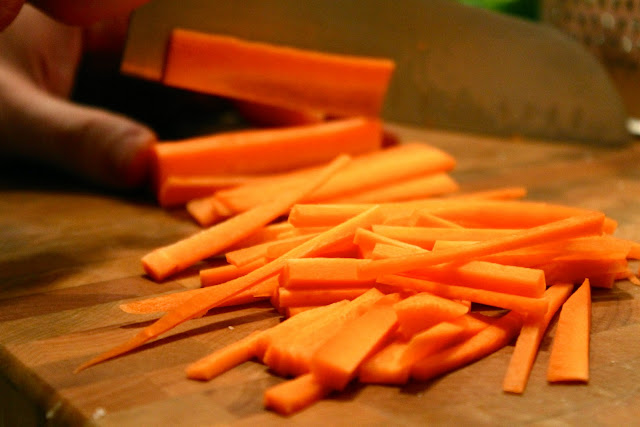 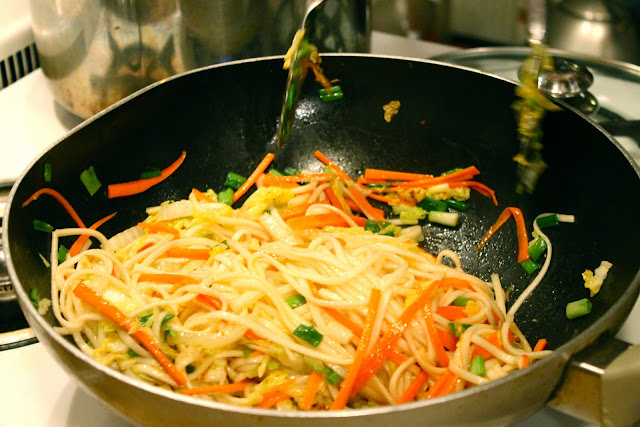 Your photos are amazing.... Plan to try this one over the weekend