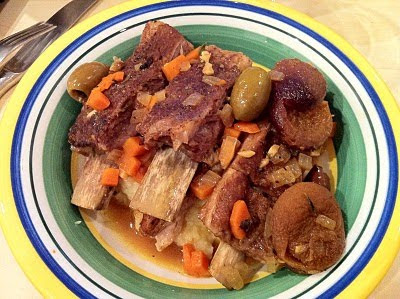 I was in the mood for something braised and warm on a cold winter’s night. I was thinking Osso Bucco, but it was too expensive, so I decided on braised Moroccan pork ribs. I decided this in Whole Foods, so I had to wing the ingredients based on my knowledge of Moroccan flavors. I wanted the sweetness of apricots and saltiness of olives to come through and compliment the rich fatty flavor of the ribs. Rather than typical bbq or roasted ribs, I wanted to have the warm stew-like feeling of braised meat. I got home and got to cooking. I threw a bunch of spices that reminded me of Mediterranean flavors and got the ribs braised. The pork worked perfectly with the spices and the braising liquid was a great accompaniment on top of the potatoes. The kale offered a nice change of texture from the pork and mash, and the whole meal almost made me forget there was a couple feet of snow outside. If you don’t want to make the potato parsnip mash, the dish would work really well over polenta, couscous or another fine grain.
Braised Moroccan Pork Ribs over Parsnip and Potato Mash with Crispy Kale
Ingredients:
1.5 lbs St. Louis Pork Ribs
1 tbsp each of cumin, pepper, coriander, mustard seed, cinnamon, turmeric, sugar and salt (if you have extra, save it for another use)
1 carrot
1 yellow onion
3 garlic cloves
2-3 cups of chicken broth (enough to cover ribs)
Cinnamon stick
2 bay leaves
1 lemon sliced
1 cup olives
1 cup Turkish dried apricots
2 tbsp honey
1 lb potatoes
½ lb parsnip
Milk
Butter
Salt Pepper
Kale
Olive Oil
To Cook!
Spice Mix:
Mix cumin, pepper, coriander, mustard seed, cinnamon, turmeric, sugar and salt and grind in a mortar and pestle or spice grinder until fine.
Pork ribs:
Coat the ribs in the spice mix and sear both sides. Add the carrots, onion and garlic around the ribs, stirring so that they don’t burn while the ribs sear. Add the broth to cover it along with a little more spice mix, the cinnamon stick, bay leaves, lemon slices, olives, apricots and honey. Braise for 1.5 hours until ribs are just falling off the bone.
Potato and parsnip mash:
Bring water to a boil, add salt and boil the potatoes and parsnips and boil for 10 minutes until they are fork tender. Strain, reserving a little of the boiling liquid and mash them. Add salt, pepper, milk, and butter and mash until very smooth.
Crispy Kale:
Preheat oven to 350. Wash kale and dry thoroughly with paper towel. Massage the leaves with olive oil, and put in the oven for about 8 minutes until lightly browned and crispy. Toss with salt and serve on top or on the side of the ribs.
Posted by Ty's Kitchen at 3:06 PM