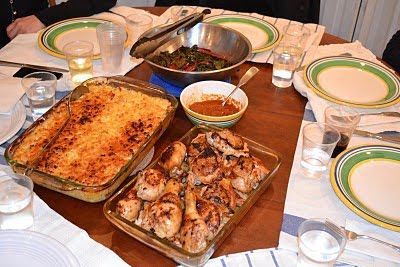 Sunday nights are generally pretty lazy, but on the night before President’s day, there’s nothing better than spending time with friends and sharing laughs and a good comforting meal. All of my friends are always busy, always all over the place, so it’s great when we can all get together and spend some quality time. I invited everyone over for dinner and wanted to make a delicious family style meal. I decided on tangy tomato crispy chicken legs and thighs with mac and cheese and red chard (my favorite green du jour). I spend much of the weekend browsing cookbooks, and came across a mouthwatering recipe for mac and cheese in an awesome cookbook my lovely girlfriend gave me for my birthday: The New Brooklyn Cookbook. I recommend this cookbook for anyone who loves Brooklyn restaurants (or delectable pictures of food and restaurants…) While I was cooking everything, my back started KILLING me. I wanted to make sure the meal turned out well, so I ended up cooking the whole thing half hunched over and in some pretty bad pain, but THE SHOW MUST GO ON!! It probably wasn’t the best idea because I spent all of Monday lying down, but in the end it was worth it for a delicious meal with great friends. The mac and cheese ended up being the best I ever made, and the chicken came out great. We had a lot of laughs and enjoyed spending time together.

Tangy Tomato Sauce (It was a cross between a tomato sauce and a bbq sauce):
Chop the onion, carrot, celery, jalapeno and garlic. Heat oil in a heavy bottom pot and sautee the first 4 veggies, once they start to become translucent, add the garlic. Zest the orange and add to the pot along with the bourbon and juice from the orange. let the bourbon boil for a minute so the alcohol burns off, then add the can of tomatoes, molasses, mustard and vinegar. Once the mixture is simmering, add the sugar, salt and pepper and stir through. Use a hand blender to puree the sauce and let simmer, covered, for about 20-30 minutes. Set aside and let cool.

Crispy Chicken:
Brine the chicken in a salt solution and pat dry with paper towel, cutting off any extra skin from the thighs. Using a spoon, put a spoonful of sauce under the skin of the chicken and pat down to spread around. Salt and pepper the outside of the chicken and heat oil or bacon fat in a cast iron skillet. In batched, sear the chicken skin side down (about 4 minutes) then flip for one minute and move to a pan. Once all of the chicken is browned, cook in a 400 degree oven for 20 minutes to cook through.

Mac and Cheese:
Boil water in a pot and cook the elbows until al dente. Drain, toss with olive oil and set aside to cool. Slice the bacon into thin pieces and cook in a cast iron (I did this before cooking the chicken and used the fat to brown the chicken). Remove when the bacon is browned and move to a plate with paper towel. In a saucepan, bring the milk and cream to a simmer. In a heavy bottom pot, melt the butter and add the flour, stirring constantly to make a golden roux (about 4 minutes). Slowly add the milk.cream and stir constantly to incorporate while scraping the bottom to make sure the flour doesn’t burn. Once the mixture is smooth, add half of the cheese and stir frequently until cheese is melted. In a large glass dish, put the elbows and cover with the sauce, mixing so that the sauce gets on all of the elbows and throughout the dish. Sprinkle the remaining cheese on top of the pasta and then the bread crumb. Cook in a 400 degree oven for 20 minutes, until bubbling and finish in a broiler for 3 minutes to brown the top.

Red Chard:
Coarsely chop the chard into 1 inch strips. Heat 1 tbsp of olive oil in a large pan and sautée the remaining chopped garlic. Once garlic starts to brown add the chard and toss in the oil and garlic. Add ½ lemon juice and cook until chard is fully wilted.