These Are a Few of Devon's Favorite Things 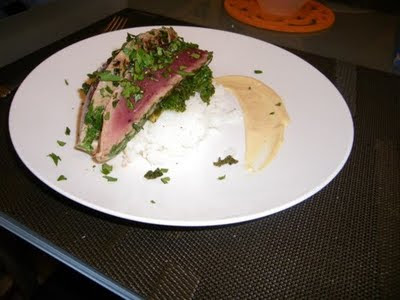 After a long Friday, I was in the mood to do some damage in the kitchen. Devon, my girlfriend, was feeling a little down after having to stay in the office late, so I decided to gather up some of her favorite items for a surprise cheer-up dinner. I went to Whole Foods with a bit of a plan, but as I often do, I just went with the flow. While walking by the fish section, I saw a huge round fish that had just been butchered. I wasn’t familiar with the fish by sight, so I asked the fish counter what it was. I learned that the fish was called Opah, native of Hawaii, and it was similar to Tuna. I was very intrigued by the fish, so I took a gorgeous cut of the cheek meat (they told me this was the most tender). They also told me that the fish was best served seared and very rare. Upon hearing this, my mind was aflutter with ideas. I grabbed a dozen oysters from the fish counter, and ventured off to construct my vision. I wanted to feature the fish, so I decided to make a “deconstructed sushi”. I picked up some kale in place of the seaweed, some sushi rice, and some cilantro for a marinade for the fish. I also grabbed a shallot to make a mignonette to go with the oysters, some robusto (her favorite cheese), and a bunch of red gerber daisies, Devon’s favorite flower. 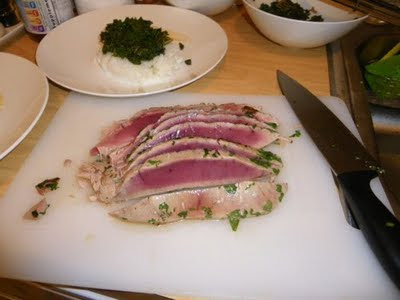 I got home and prepped the fish by rubbing it with olive oil, chopped cilantro and some salt and pepper. I set that aside, and made a mignonette and some cocktail sauce for the oysters. For the mignonette, I finely diced the shallot and mixed it with pepper and red wine vinegar. For the cocktail sauce, I mixed ketchup, horseradish, lemon, and pepper. Once my sauces were made, I shucked the oysters (very efficiently!) and put the half shells on ice. 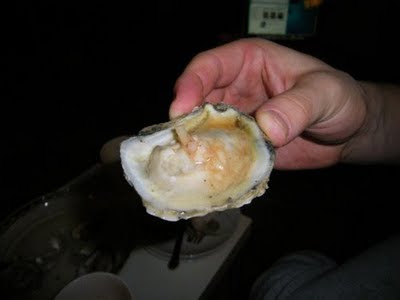 For the rest of the Opah plate, I cooked the sushi rice, adding a little rice vinegar and sugar to make it sticky. I then cut the spine of the kale out, sliced the kale into about 1 inch slices and sauteed it with lemon, garlic, some toasted sesame oil and a bit of mirin. For the sauce, I mixed mayonnaise with wasabi and sriracha chili and it tasted exactly like the spicy mayo used in spicy tuna rolls.Devon came home to flowers, a nice hors d’oeuvres spread of oysters and cheese and the Opah. The meal was a complete success and everything worked perfectly together. Assembling a bite with fish, kale, rice, and spicy mayo made you think you were eating a spicy tuna roll. The fish had a similar flavor to tuna, but was much more delicate and tender. I will definitely buy Opah again if I see it at the fish counter.
Posted by Ty's Kitchen at 2:58 PM