Cassoulet in the Mountains 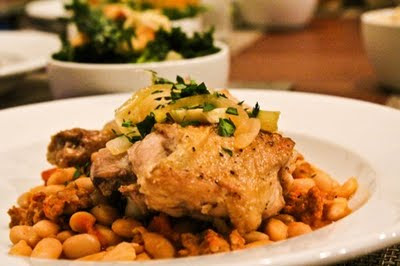 While visiting my sister in Aspen along with Heath and my cousins Adam and Stephanie, I wanted to cook a great meal for everyone to celebrate our trip. I wanted to cook something hearty and warming in the cold Colorado air; something that would refill us after a solid weekend of skiing. I decided on making a cassoulet with crispy braised chicken legs with a kale caesar salad. I picked up 6 chicken legs, 3 cans cannellini beans, bulk chorizo, fennel, onion, parsley, diced canned tomatoes, garlic, some white wine, and bay leaves. To cook the cassoulet, I diced the onion and sauteed it in a large saucepan. I added the garlic after a few minutes, and once the onions began to get translucent, I added the chorizo to brown it and cook through. Once the chorizo was cooked through, I added the beans (drained) and the can of tomatoes and some chopped parsley. I added a little salt, pepper, bay leaf, crushed red pepper, and a little bit of sugar and let the pot simmer for 45 minutes on low to cook through and let the flavors expand.While the cassoulet cooked, I prepped the chicken by patting it with paper towel and rubbing salt and pepper over it. In a large dutch oven, I heated some olive oil on medium high, and in batches, browned the chicken skin side down for about 5 minutes, and then flipped and cooked for about 1-2 minutes. Once the chicken was browned, I set aside. I drained most of the fat from the dutch oven and added the sliced fennel and onion. Once the fennel and onion became translucent, I added garlic, white wine, and bay leaf. I added the chicken back in in one layer, skin side up, and put the pot covered in the oven at 375 for about 25 minutes. Once the chicken was cooked through, I put the cassoulet in large bowls, served the chicken on top, and the fennel and onions on top of that. I added a little parsley garnish on top as well. 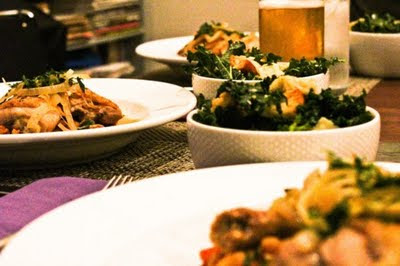 For the kale caesar, the key is making a good dressing. For the kale, I steamed it for a few minutes until it’s starting to wilt. I tossed the kale with a little salt and set aside in a large salad bowl. For the dressing, I used a small food processor and mixed 2 garlic cloves, dijon mustard, an egg yolk, and 2 chopped anchovy filets until smooth and combined. I then added lemon juice, red wine vinegar, worcestershire, and a dash of tobasco and mixed until that is fully combined. I then added olive oil while stirring to emulsify. The result is a creamy, tangy caesar dressing. I cooked the leftover egg white in a small sautee pan, mixed that with the kale, tossed the salad with the dressing and added some croutons.
The trip was awesome, amazing skiing, fun stories, great meals. This meal was a really special way to finish the trip up, and we all had a great time.
Posted by Ty's Kitchen at 3:13 PM