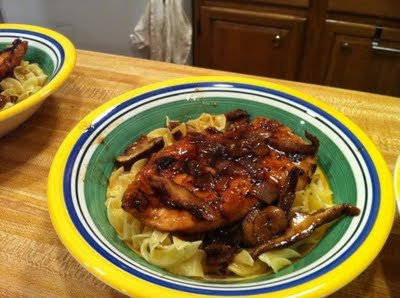 My friend Heath, was turning 26 and starting a new job the next day, and I wanted to throw together a nice meal to celebrate. I decided on chicken marsala over egg noodles with a nice salad on the side. I bought 4 boneless, skinless chicken breasts, a sliced mushroom mix, marsala wine, and egg noodles. Once I got home, I flattened the chicken and dredged the cutlets in flour mixed with oregano, thyme, crushed red pepper, salt, and pepper. I browned them in my cast iron and set them aside. While my water boiled, I sauteed the mushrooms and an a diced onion in the cast iron. Once they were browned, I added fresh thyme and the marsala. I let it cook down for a few minutes to burn off the alcohol, and then added the chicken cutlets. I let the entire dish cook for about 5 minutes to finish the chicken and thicken the sauce. Once the egg noodles were done, I tossed them in olive oil and served the chicken marsala on top with some parm to top it off. 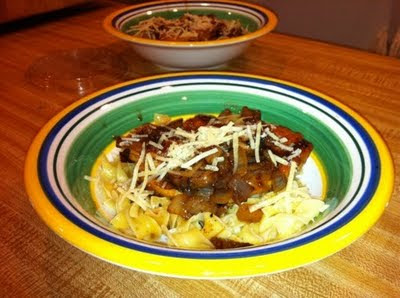 The meal was delicious, and Heath appreciated it despite being extremely tired from a weekend of celebration. I had some leftovers as well, so when I reheated them, I tossed them in the cast iron with some olive oil, a little more marsala and a good handful of parmesan. The leftovers were delicious, a little richer than the original dish, but it ended up being a delicious 2 for 1 dish!
Posted by Ty's Kitchen at 3:05 PM