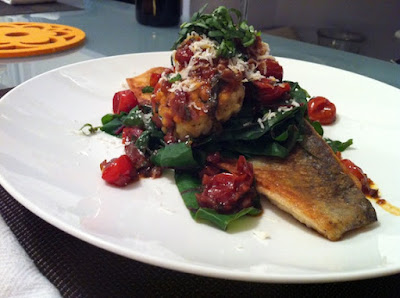 I recently went to the doctor and found out that my cholesterol is on the high side. He recommended I get rid of fatty foods and improve my overall diet. Always up for a challenge, I wanted to come up with a way to make an extremely healthy meal that was both visually and gustatorily pleasing. I chose trout for the protein as it is very high in healthy fats that increase your HDL cholesterol. For the “pasta”, I wanted something that looked like pasta but was anything but. I decided to use red chard and cut it into strips. Chard is one of my favorite greens, and it’s hearty enough to stand up to tomato sauce. For my “meatballs” I decided to try something totally new and made barley balls.
For the tomato sauce, I sauteed cherry tomatoes with some garlic, parsley, lemon, onion, tomato paste and red wine. I let it simmer until the tomatoes were falling apart and then set it aside.
To make the barley balls, I cooked barley in advance and let it cool. I then mixed it with egg, bread crumbs, salt, pepper, and some sauteed onion and garlic. I made sure the mix was thick enough to adhere during the cooking process, and constructed my barley balls. Once I had the balls, I put them in the freezer for 15 minutes to let them set. Once they were cold and solid, I heated canola oil (also very good for you) and browned the outsides of the barley balls. The result was a crispy on the outside, soft on the inside ball that had a heartiness similar to meatballs.
For the trout, I floured it with a little salt and pepper and then pan seared each side until golden. I used the crispy trout as the base, places a pile of chard “pasta” on top of that, added 2 barley “meatballs” and topped with the tomato sauce and some parm.
All together, the meal was reminiscent of a fine Italian pasta dish with a very healthy and unexpected twist. The barley balls turned out perfectly and were delicious to eat even on their own. Now that I’m being more conscious about what I’m eating, I’m looking forward to having more meals that are as fun and inventive as this one.
Posted by Ty's Kitchen at 3:18 PM